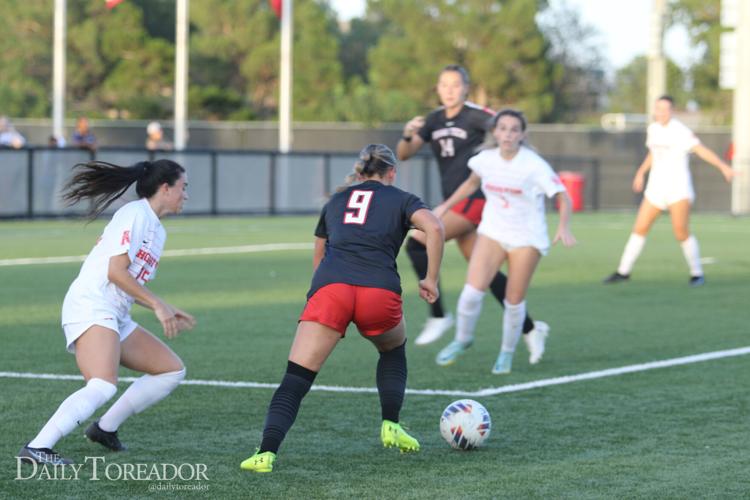 No. 9 Peyton Parsons cuts inside Houston's defense to push the ball inside the goal box at John Walker Soccer Complex on Sept. 8, 2022. 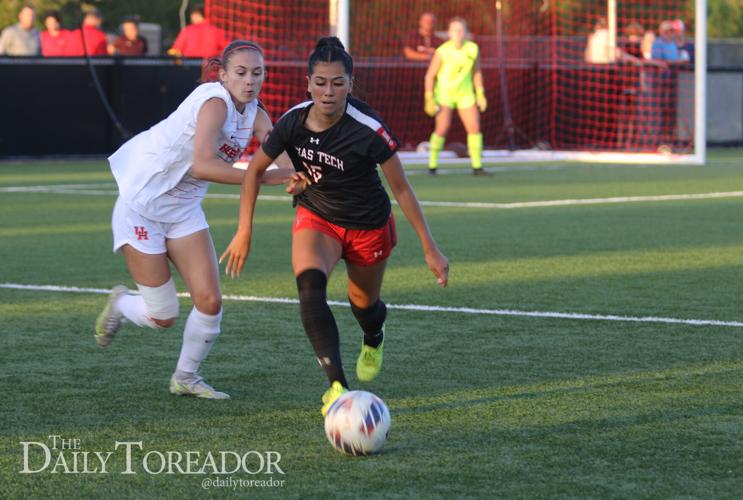 No. 15 Gisselle Kozarski fights for the ball against Houston at John Walker Soccer Complex Sept. 8, 2022. 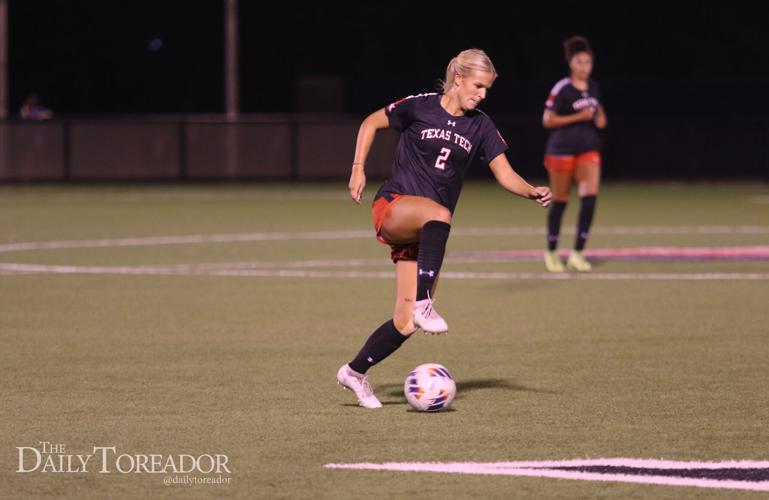 Tech soccer found itself back in the win column Thursday following a 3-0 win against Houston at John Walker Soccer Complex.

The win marks Tech’s first in five games, dating back to the season opener against Troy on Aug. 18. The three goals scored matched the total season tally coming into the game and puts the Red Raiders at six goals on the season, according to Tech Athletics.

Tonight's match also marked the first start of the season for redshirt senior defender Sierra Jones. Even more impressive is this was Jones’ first start in 675 days after suffering a torn ACL in 2020.

Jones spoke about what kept her motivated throughout her recovery and what it felt like being on the pitch again.

“The amount of support that I’ve had from my teammates is unbelievable,” Jones said. “It is intimidating starting again after that long but again, not once did I ever feel uncomfortable. They made me feel comfortable, they were communicating with me.”

The Red Raiders controlled possession early and senior forward Macy Schultz was able to make several runs at goal in the opening minutes.

The aggressiveness offensively continued for Tech throughout the half as they tallied four corner kicks through the first 25 minutes. The Red Raiders would break through in the 27th minute as freshman forward Peyton Parsons found the back of the net off a deflection.

The goal from Parsons is her first goal of the season and of her collegiate career. Parsons gave insight on the play that led to her score and what she has been gaining mentally throughout the season.

“Finally getting that first goal is the best feeling in the world. The give and go and the shot that led to trickling out towards me was just a perfect set up,” Parsons said. “Just learning from Jillian (Martinez) was great… she’s not afraid to give me tips or tell me how to do something or criticize me.”

Head Coach Tom Stone also gave his perspective on what Parsons' goal meant for the team.

“I think when Peyton (Parsons) scored it was just a massive relief for everyone,” Stone said. “You’re always excited when you score but when you’ve been snake bit in front of the goal, that was a good one.”

The Red Raiders wasted no time in finding the goal again as senior forward Macy Schultz put a shot top shelf that sailed over Houston goalkeeper Haley Woodward. The goal was Schultz’s second on the season.

Schultz put up three shots for the night, tied for a team high along with Gisselle Kozarski. Stone gave his thoughts on Kozarski’s performance for the match and for the season so far.

“She’s been our most dangerous player. I know the stats don’t show it, but she’s been the one that’s threatened the goal the most,” Stone said. “The move she made to create to shoot was fantastic. Gisselle is having a heck of a season so far.”

Tech also kept up the defensive consistency that has become a defining aspect of the team this season, not allowing a single shot from the Cougars in the first half.

The offensive tempo slowed down for the Red Raiders, who opted to instead control possession in the midfield.

Despite being awarded five corner kicks, Houston was unable to find any sort of offensive rhythm, and it was not until the 74th minute of the game that the Cougars would get a shot on the board.

The Red Raiders gained one more opportunity to score in the 80th minute. A botched throw in from Cougars goalkeeper Haley Woodward left Ashleigh Williams with a wide open goal and her shot extended the lead to 3-0.

Tech soccer will be back in action on Sunday, Sept. 11 on the road against North Texas. Kick-off for the match is set for 1 p.m with ESPN+ providing TV coverage.