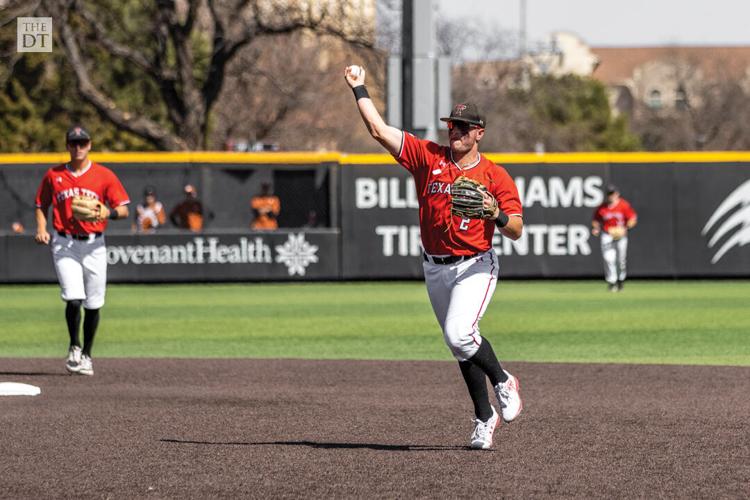 Sophomore infielder Jace Jung quickly passes the left field hit from the University of Texas to first base to get the third of out at Dan Law Field at Rip Griffin Park on March 26, 2022. 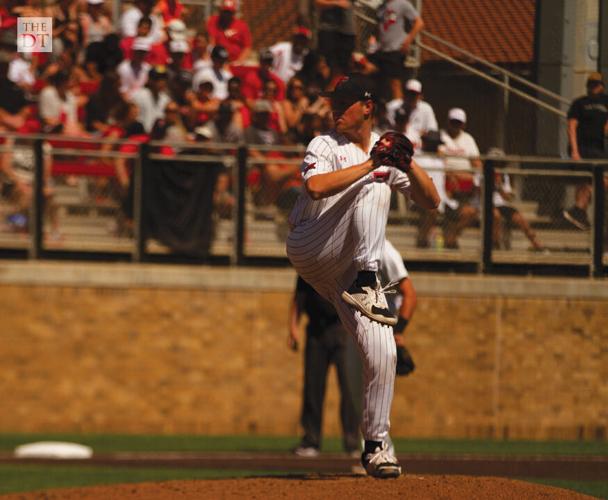 Mason Molina gets into position to pitch the ball during the baseball game against the University of Texas at Dan Law Field at Rip Griffin Park on March 27, 2022. 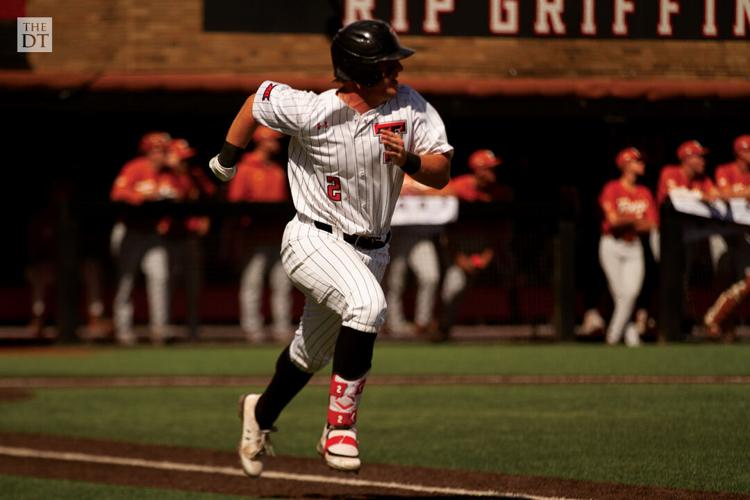 Jace Jung sprints to first base during the game against the University of Texas on March 27, 2022 at Dan Law Field at Rip Griffin Park.

The No. 16 Texas Tech baseball team suffered its first home loss of the season after dropping the series finale to No. 2 Texas 12-1 at Dan Law Field at Rip Griffin Park. The Longhorns scored 11 runs over the final three innings as a run rule ended the game after seven.

Sophomore left-handed pitcher Mason Molina got the start against a Longhorn offense that exploded for 37 runs on 48 hits over the first two games of the series.

Molina navigated through a clean first inning, a first for a Tech pitcher this series, before Texas got on the board with a sacrifice fly off the bat of second baseman Mitchell Daly. Daly finished the day with three RBIs, including a solo home run in the fifth inning, his first of the year according to Texas Sports.

The home run was the second of back-to-back home runs that Molina surrendered in the frame, after third baseman Skyler Messinger led off the inning with a long ball. Molina retired the next two batters before being relieved by sophomore right-handed pitcher Josh Sanders.

The true freshman ended his first career Big 12 start with four strikeouts while surrendering three earned runs on five hits. Molina was also credited with the loss, dropping him to 1-2 on the season.

Tech’s lone run came in the bottom of the third inning, with senior left fielder Easton Murrell scoring off a sacrifice fly from sophomore second baseman Jace Jung. The Red Raiders were shut out for the next four innings, as Texas only used two pitchers in the shortened contest.

Starting pitcher Lucas Gordon struck out seven in a 101-pitch outing, his highest pitch count this season, according to Texas Sports.

As the Tech bats went quiet, the Longhorns put up eleven runs over the final three innings to quickly turn the game into a blowout. After pitching the ninth and tenth inning and earning the win in Tech’s game one victory on March 25, sophomore right-handed pitcher Josh Sanders surrendered two runs off a pair of  RBI singles in the top of the sixth to make it a 5-1 Texas lead.

One of the few highlights for Tech on offense was Murrell, who batted 3-4 on the day. The fifth-year senior finished his series against the Longhorns 6-12 with four RBIs and a pair of leadoff home runs.

“Easton is seeing the ball really good and puts together good, professional at bats,” said Tadlock. “That’s something that definitely helped us get through the weekend.”

Tech ends its opening weekend of Big 12 play 2-1, improving to 20-5 overall on the season. The Red Raiders return to Rip Griffin Park on March 25 for a midweek series against Stephen F. Austin before traveling to Lawrence, Kansas on Friday for a three-game series against the Kansas.