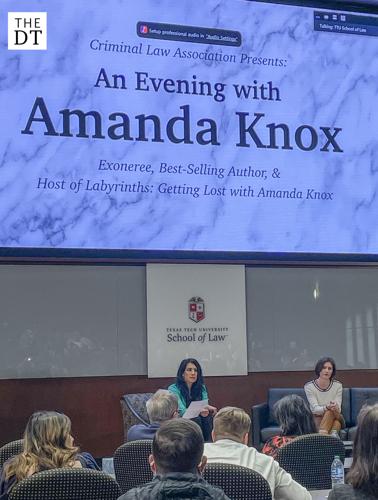 Amanda Knox, a journalist, author and activist speaks at the Texas Tech School of Law on March 31, 2022, telling her story of a wrongful murder conviction in 2007. Since her release, Knox has worked to shed light on issues within the prison system, public shaming and truth seeking. 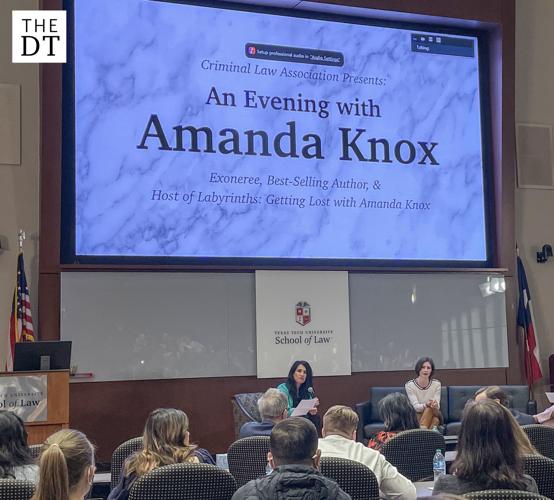 Amanda Knox speaks to a room of listeners at the Texas Tech School of Law on March 31, 2022. Knox is an author, journalist and activist who was wrongly convicted of her roommate's murder in 2007 and spent almost four years in an Italian prison.

Amanda Knox, a journalist, author and activist speaks at the Texas Tech School of Law on March 31, 2022, telling her story of a wrongful murder conviction in 2007. Since her release, Knox has worked to shed light on issues within the prison system, public shaming and truth seeking.

Amanda Knox speaks to a room of listeners at the Texas Tech School of Law on March 31, 2022. Knox is an author, journalist and activist who was wrongly convicted of her roommate's murder in 2007 and spent almost four years in an Italian prison.

On Thursday, Amanda Knox, exoneree and best-selling author, spoke at the Lanier Auditorium in the Texas Tech Law School.

Knox shared her experiences with Tech law students and the Tech community about how an innocent trip to Italy while studying abroad in 2007  completely changed her life. Knox was wrongfully convicted of the murder of Meredith Kercher, her study abroad roommate, and spent years in an Italian prison for a crime she didn’t commit.

“I'm a true crime nerd,” Jessica Longoria, a 3rd year law student from Amarillo, said. “So, I've definitely heard the name Amanda Knox before, I wanted to come out and listen to her story of having to go through the exoneration process and having to prove her innocence, which is really important to what is going on in the criminal defense field right now. Our system is kind of designed to be against the defendant almost.”

Longoria said she is grateful for the opportunity to hear Knox’s story firsthand and to be able to utilize the information to further aid her in her future career as an attorney.

What she learned from her experience, Knox said, was that she was indirectly a victim of crime prior to ever being victimized by the criminal justice system.

“I just think it is important to educate yourself on these things,” Xenna Davis, a 3rd year law student from Dell City, said. “You never know if you're going to be in that position, if you're behind closed doors being interrogated and how you would handle it. I think it's important for people to know their rights especially, but I think this is particularly interesting, because it was an American on foreign soil, and so obviously, those rights aren't really afforded to her.”

Throughout her trial, Knox said she found out that a courtroom is not what she originally thought it was.

Knox said she initially thought of a courtroom as a place where all information gets boiled down to the truth, but she came to realize that a courtroom was a battleground of stories in which the most compelling story wins.

“There's the fascination with exoneration,” Justice Barkman, a 2nd year criminal law student and member of the Criminal Law Association, said. “I think that is something that's very much in the popular conscience, and I think it's been even renewed for people that come in like Amanda Knox, it's the popular thing. Amanda Knox is a best-selling author and there's a podcast in addition too. She's stayed in the public eye in addition to working with the Innocence Project.”

According to it's website, the Innocence Project is dedicated to preventing innocent people like Knox from being wrongfully convicted of crimes.

“We're not being listened to, you know,” Davis said, “Same thing with doctors, how they don't listen to their female patients, I feel like if this were a male in her scenario, the story would have gotten straightened out way sooner. And I feel like because she was a female, that may have caused some of  the chaos that, was created from everything.”

Despite what she went through, Knox said,  it took her, a white female, being convicted for more people to finally look and address the issue at hand.

Despite the stigmatism behind women convicts, Davis said  the turnout at Thursday’s event says a lot about the changes happening in society and how they are influencing change in the way victims and those convicted are seen in the public eye.

“I would like to think that everybody's here for the good reasons,” Davis said. “I know some people are here just because they want the drama, they want to see it and stuff like that. It’s true crime. But I do think that this is a good step to getting to where we need to be.”