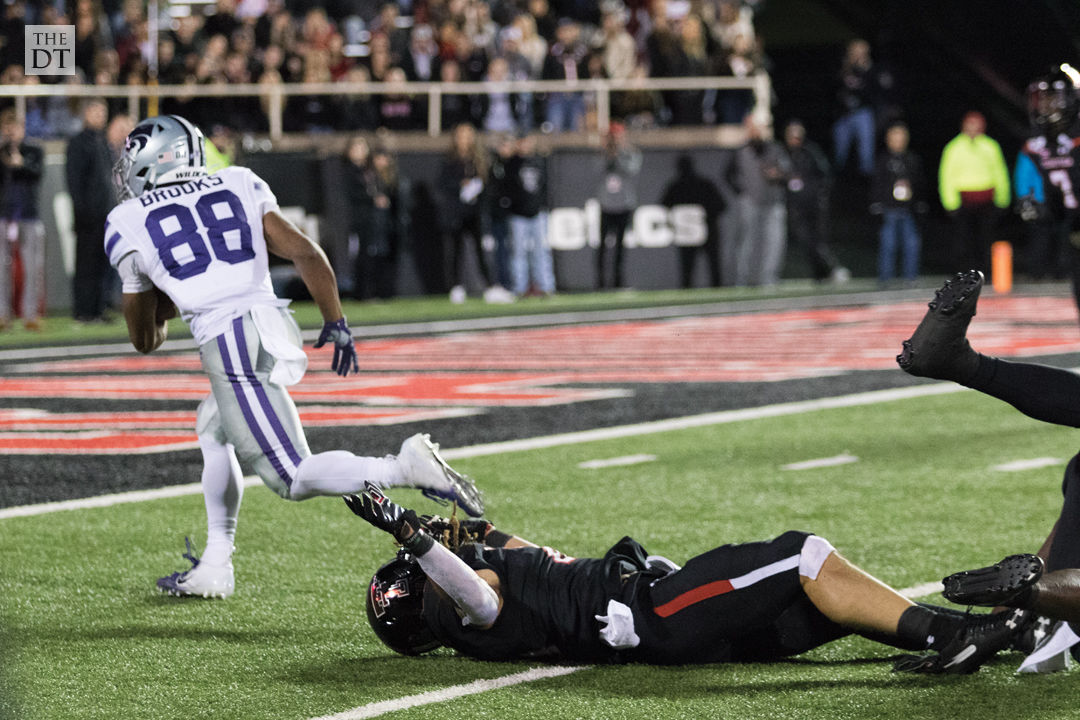 Junior defensive back Thomas Leggett attempts to tackle Kansas State from scoring a touchdown during the Texas Tech vs. Kansas State football game at 6 p.m. on Saturday, Nov. 23, 2019, at the Jones AT&T Stadium. The Red Raiders were defeated by the Wildcats, 30-27, in their Senior Night game. 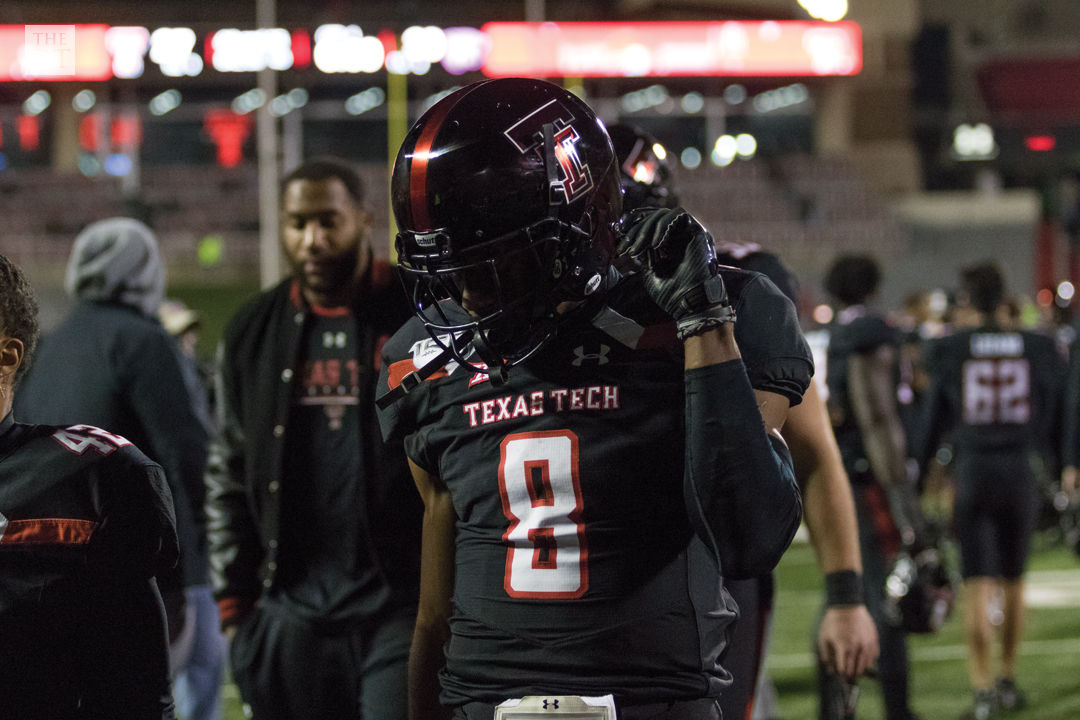 Junior defensive back Zech McPhearson takes off his helmet at the end of the Texas Tech vs. Kansas State football game at 6 p.m. on Saturday, Nov. 23, 2019, at the Jones AT&T Stadium. The Red Raiders were defeated by the Wildcats, 30-27, in their Senior Night game. 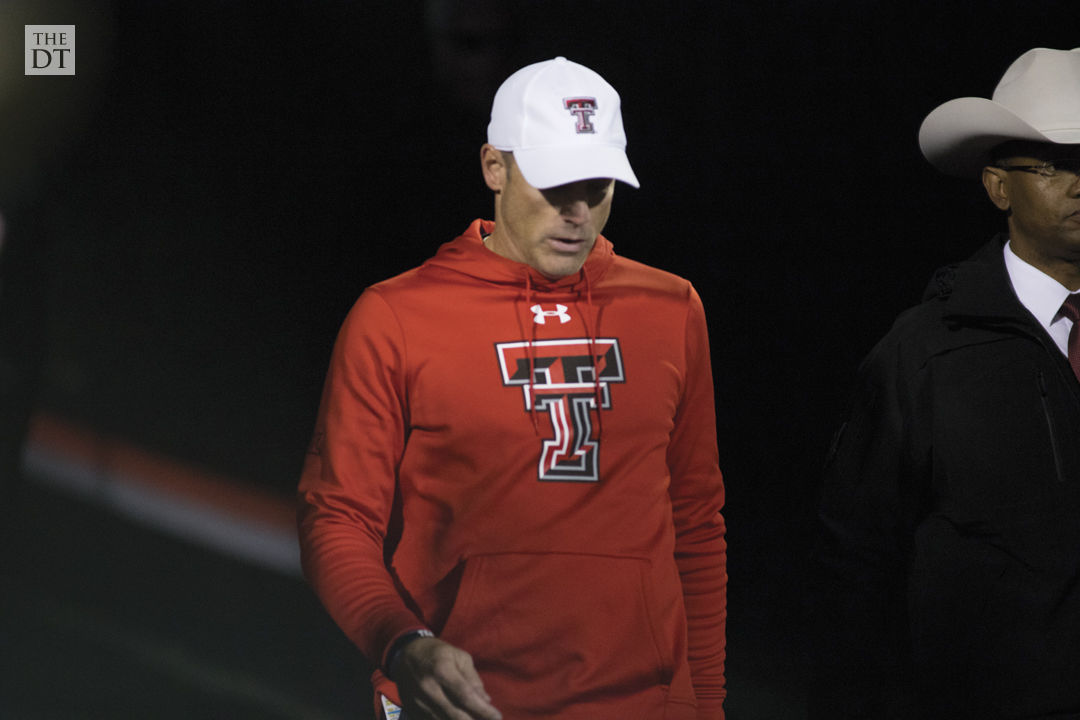 With the 30-27 loss to Kansas State on Saturday, the Texas Tech football team’s hopes of making a bowl game were crushed on the Red Raiders’ senior night at Jones AT&T Stadium.

“It hurt,” sophomore defensive back Adrian Frye said following the loss. “Every week we bust our butts on the fields and in the meeting rooms, and it’s just, this loss is solidifying the fact that we can’t make a bowl game is really heartbreaking. Really devastating.”

At the start of the season, head coach Matt Wells said to the fans and media that he wanted to try and go undefeated at Jones AT&T Stadium, trying to replicate the men’s basketball team’s success at home.

Before the fans got to see Tech play under Wells for the first time against Montana State, Wells said he recognized how important it was to play well in Lubbock.

“We’re excited to play in front of you in Jones Stadium, and we understand how important it is for us to play well at home in front of our fans, for our alumni and the players that have played in this program before us,” Wells said in a press conference the week of the Montana State game. “We take that as an honor to do that but also a tremendous responsibility to play well in front of our home people.”

With that mindset, Wells coached the Red Raiders to two early home wins against Montana State and the University of Texas at El Paso. After suffering back-to-back losses to Arizona and Oklahoma, Wells and the team returned to Lubbock to take on a ranked Oklahoma State team. The Red Raiders defeated the Cowboys, 45-35, to remain undefeated at home as the team improved its overall record to 3-2.

“The energy was really, really good in there today, and we’re going to continue to do everything we can to make the Jones the hardest place to play in the Big 12,” Wells said following the win over Oklahoma State, “and I understand our team is a big part of that, but so is the fans, and I just appreciate all of them coming out and support our guys through the end.”

As the season went on, the success the Red Raiders showed at the start of the season slowly faded away as the Red Raiders dropped to a 3-5 overall record after losing three consecutive games at the hands of Baylor, Iowa State and Kansas. Knowing the team needed six wins on the season to be eligible for a bowl game, the Red Raiders traveled to Morgantown to take on West Virginia with four games left on the schedule.

Despite posting a losing record, sophomore wide receiver Dalton Rigdon said the whole team was bought in and looked forward after knowing the team needed to win three of the last four games of the season to be bowl eligible.

“I don’t think it’s really that difficult to try and have young men buy in for your older teammates,” Rigdon said regarding the younger players’ mindset before the West Virginia game. “With bowl eligibility and making bowl games, you’re winning, you have to be winning to have that. There’s not a person that comes into this building that doesn’t want to win or doesn’t have the will to go and win every weekend.”

The Red Raiders ended up defeating the Mountaineers in Morgantown for Tech’s first road win of the season under Wells’ coaching. The win also put the Red Raiders at a 4-5 overall record, two wins away from making a bowl game.

“Our backs are against the wall,” Wells said after the win. “We know exactly where we’re at, and we’re fighting to become bowl eligible and that’s the goal. Now because of the circumstances in October, that’s now the goal. It’ll be backs against the wall for the rest of the way.”

With a bowl game in reach for the Red Raiders with home games against Texas Christian and Kansas State, followed by an away game against Texas, junior linebacker Riko Jeffers spoke about the team’s goal heading into the game against TCU.

Tech came up short in the game against TCU, losing 33-31. A fumble in the last two minutes of the game secured the Horned Frogs’ two-point win. With the loss, the Red Raiders had to win their last two games of the season to make an appearance in the postseason.

“Right now (getting a bowl game) is our biggest focus because, I mean, we’re right there,” senior defensive lineman Broderick Washington Jr. said before the game against Kansas State. “We win out. We get that bowl game, and we’re pretty much looking at that as our championship game this year, especially for the seniors because we’re only guaranteed two more games. After that, we’re not really sure what’s going to happen.”

In the coin toss before the game against Kansas State, Tech won the coin toss and chose to receive the ball. With the aggressive mindset, the Red Raiders failed to get a first down as they went three-and-out. Following the three-and-out, both Tech and Kansas State’s defense showed up in the first half as the Wildcats led 6-3 after two quarters of play.

Following the slow start for both teams, the scoring increased in the second half as the two dual-threat quarterbacks, junior Jett Duffey and Kansas State’s Skylar Thompson, moved the ball more efficiently. At the end of the game, Duffey recorded 334 passing yards and 57 rushing yards, but his two interceptions played a part in the team’s 30-27 loss.

“We changed a lot of stuff this week. He handled that very well,” Wells said. “I thought he handled the clock well, scrambling, the run game stuff, very well. And, you know, I’m sure he would tell you he wishes he had both picks back.”

“Our seniors are strong, our seniors are great leaders,” Duffey said. “Even though they were down, and they were feeling upset, they reminded the team that we need to steer and continue forward and also in the future.”

After playing his final game at Jones AT&T Stadium, senior wide receiver RJ Turner spoke about what he took away from this season with the Red Raiders.

“I’m thankful for it, for sure,” Turner said. “I don’t have too much to take from it other than the lessons and the friendships. The lessons I learned and the bonds I’ve built because for me it was a step up and good, bad or ugly, I was thankful for it all. It was an opportunity to do something I’ve never done, and I’m glad I had the chance to with the people I had to do it with.”

As this was his final season of eligibility, Turner led the team with 619 receiving yards and 41 receptions, according to Tech Athletics. The game against Kansas State set a career-high for Turner as he recorded 141 receiving yards, highlighted by a 58-yard touchdown.

Tech’s loss which ended their chance of a bowl game also occurred at the game recognizing the seniors. Following the game, Wells reflected on what seniors have done for the program.

“These seniors have a special place in my heart. What they did to help us continue, or to set this foundation, I think it reflects a passion, it reflects the toughness and a fight and the grit. I think we have all seen that,” Wells said. “Unfortunately, we have come up short again and that will never be good enough in terms of the win and loss and we all know that. But we’re going to keep knocking on that door, and we’re going to keep fighting and these wins are coming and they’re coming soon. And when they come, they’re going to come in bunches.”

Wells continued as he said he respects how the team has handled the season despite several close losses.

“I know that it’s frustrating right now for us. It’s frustrating for our players because we’re so close,” Wells said. “But we’re going to continue to fight and stick together. That’s one thing that I respect about that locker room is they have not turned on each other, and they have stuck it out through a lot of frustration, just in terms of the scoreboard and the results. But I am very proud of them.”

With the loss, the Red Raiders will not appear in a bowl game but will still play together one last time as they are set to play Texas at 11 a.m. on Friday in Austin. As it will be the last time this team will play with each other, Frye said he wants to end the season strong despite coming up short for a postseason game.

“As an underclassman, the last game of the season I’m trying to send our seniors out as winners in some shape, form or fashion,” Frye said following the loss to Kansas State. “This is the last home game, so I played my heart out and next week is going to be our last actual game together as a unit because this team will never be the same. We’re just going to play our hearts out because we want to send our seniors out winners at the end of the season.”