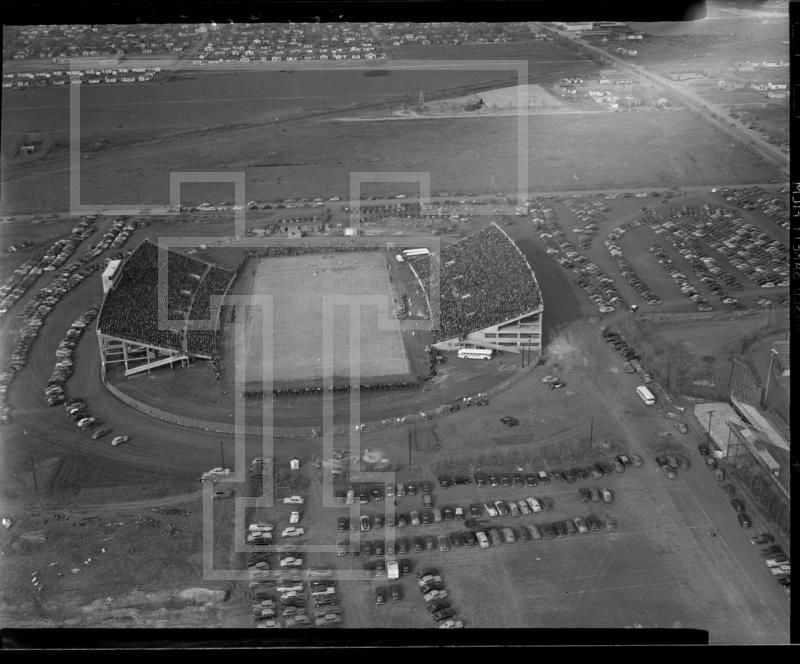 Jones Stadium in its first year of existence, 1947. According to Texas Tech Athletics, Dave Curtis of The Sporting News proclaimed in May of 2010 that Jones AT&T Stadium was the best home field advantage in all of college football. 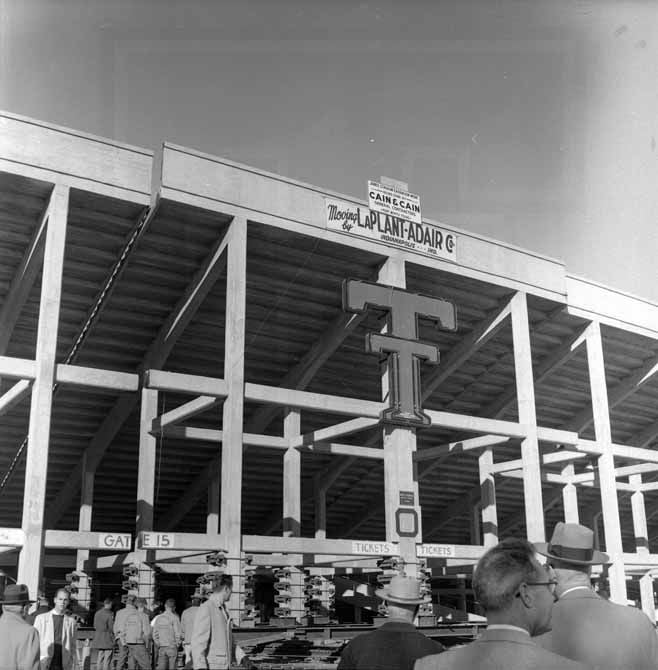 The stadium bleachers are moved back to add space around the field in 1959. 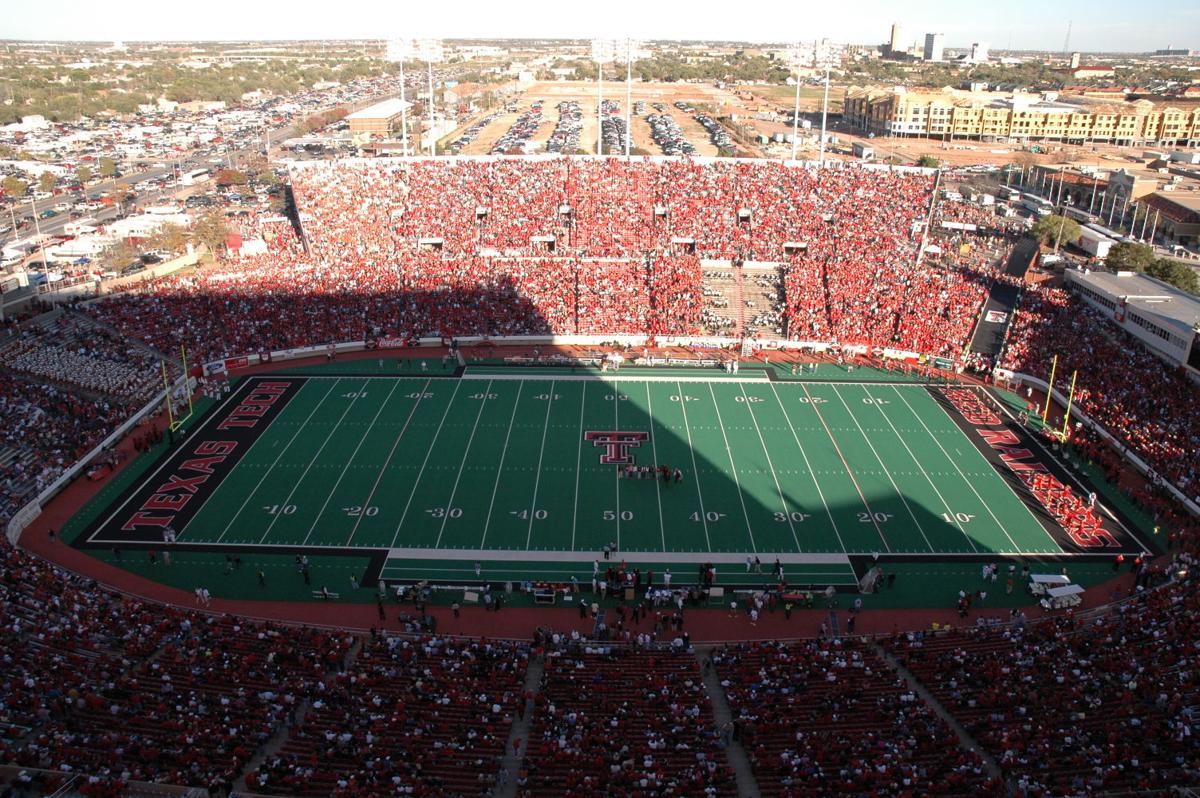 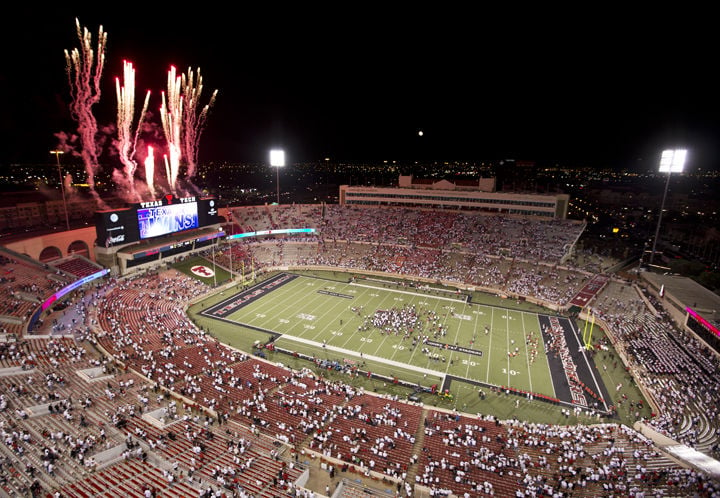 Fireworks go off after the game during the 2013 season at Jones AT&T Stadium. Texas Tech defeated Texas State 33-7.

Jones Stadium in its first year of existence, 1947. According to Texas Tech Athletics, Dave Curtis of The Sporting News proclaimed in May of 2010 that Jones AT&T Stadium was the best home field advantage in all of college football.

The stadium bleachers are moved back to add space around the field in 1959.

Fireworks go off after the game during the 2013 season at Jones AT&T Stadium. Texas Tech defeated Texas State 33-7.

On Nov. 29, 1947, the Texas Tech football team played the first home game of the season against Hardin-Simmons. The Red Raiders won the game, but the significance came more from where the teams played.

The game was the first ever played at the newly opened football stadium at the corner of 4th St. and University Ave., and although the name remains the same, much has changed about the Red Raiders’ home field.

Lubbock resident David Langford said he was about seven years old when he first saw a game at Jones Stadium, and it was in 1961, just 14 years after the stadium opened.

“Dad got season tickets while he was a faculty member, so we would usually go as a family,” he said. “A lot of faculty would pretty much sit together over there on the west side.”

Langford said the changes from then to now are pretty drastic, especially since his earliest memories of the stadium are as a child.

In the early days of the stadium, the whole north end zone was grass with just the Double T there. The area, he said, was used basically as a play area.

“The kids would all play during the game up and down the grass with the Double T insignia in it,” he said, “and then whenever there was a field goal or extra point, they would kick it into the grass, and we would all fight like the dickens to get the ball.”

It was pretty sad for all the kids of that era, he said, when the big grass area was filled most of the way in with seats, taking away their place to play.

Besides the removal of the grass area, the late 60s and 70s also brought some of the worst weather the stadium has ever had to endure.

Langford said one of his most vivid memories is also probably one of the weirdest weather games.

It was pretty stormy as Tech kicked off against Kansas, he said, but it was not until late in the first half that fans knew anything was wrong. Then, the announcer came on and said a funnel cloud had been spotted in southwest Lubbock.

Just a few minutes later, another funnel cloud was announced as seen in northeast Lubbock. The game continued on until midway through the third quarter, when the announcer said a third funnel cloud had been spotted in Lubbock and fans should go home.

“I think that may be the only time in Tech history that a game was stopped before the end, if memory serves me correctly,” Langford said. “We had to go underneath the stadium and stand there because it was so stormy. I thought it was fun, though, and just about as exciting as it could get.”

Lubbock endured another tornado in 1970, one of the worst in Texas history, and it did damage to the stadium, bending the lights around the Jones.

Another big change that came in 1970, according to the Tech Athletics website, was the addition of artificial turf as the playing surface.

It stayed that way all through the 1990s, when Tech alumnus Jason Moore was attending games as a student.

When he got to Tech in 1993, Moore said, the biggest impression he got from the stadium was just from its size.

“I thought that my old high school stadium was pretty awesome, but now I think it’s pretty puny,” he said. “When I got to Lubbock and saw the Tech stadium, it was basically a much larger, grander version of a high school stadium. There were no frills. It was just all about function.”

In 2006, the playing surface changed again, this time to field turf, which is what it is now. There were also arches added to the outside of the north end zone, but other than that no major additions have been made until this past offseason.

Last year, however, Tech Athletics Director Kirby Hocutt announced the Campaign for Fearless Champions, which would update the stadium seats for this season and then add suites in the south end zone where the classic Double T scoreboard currently stands.

“I think that would be a mistake, personally,” Moore said. “It’s such an iconic part of the stadium and that’s one thing, that when people outside of Lubbock see it, they know exactly where you’re at and what stadium you’re playing in.”

The scoreboard has not been taken down yet, but all of the bleachers and seatbacks in the stadium were replaced for this year. Tech fans will first get to experience the new additions for the first time at 2:30 p.m. this Saturday when the Red Raiders play their 1,000th game in program history.

This blog is very amazing. this is very informative post. aspireleather.com

Where will you be after Thanksgiving break?