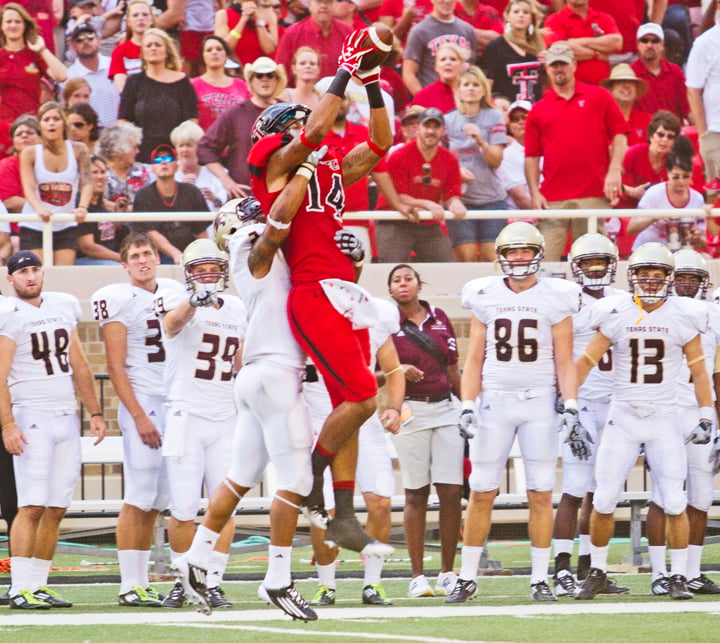 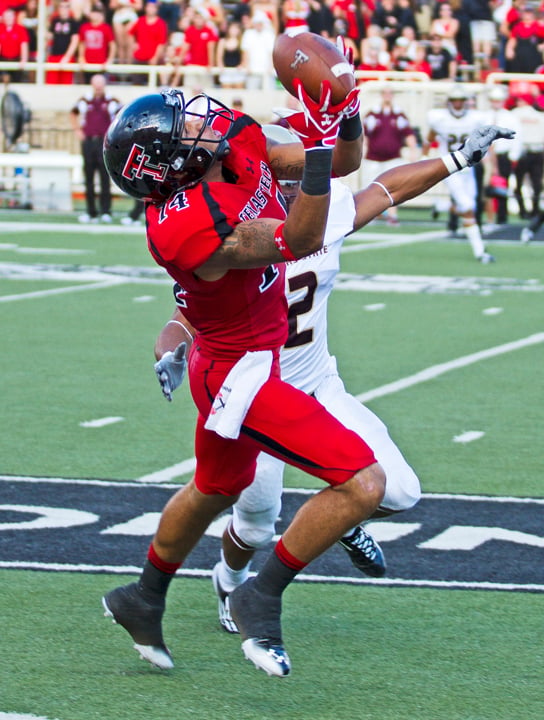 There were no player chants and no students clad with crustacean headwear.

That did not stop burgeoning Texas Tech wide receiver Darrin Moore from drawing comparisons to a former Tech wideout.

Moore shredded the Texas State secondary in the Red Raiders’ 50-10 win Saturday night, racking up 221 yards on 12 grabs and setting the school record for receiving yards in a season opener.

“I don’t think I’ve ever been around a receiver that caught that many balls for that many yards,” Tech coach Tommy Tuberville said. “But we knew he was going to be a big player for us.”The Irving native did not start off the contest ideally, though. In the first quarter, Moore hauled in a Seth Doege pass, but fumbled it after a tackle by Bobcats corner Darryl Morris.

Retribution came on the next possession when Moore streaked past Morris as Doege lofted a jump ball, resulting in a 41-yard gain.

The play was pivotal for the Red Raiders, who had struggled early offensively and were trailing the Bobcats 10-0.

“That was really a big play to get kind of some momentum going on our side and kind of get the ball rolling for us,” Doege said. “He beat (Morris) one-on-one. All I had to do was put some air on it and I knew he would go get it.”

Doege found true freshman Bradley Marquez in the back of the end zone on the next play to put the Red Raiders on the scoreboard.

The connection between Doege and Moore has been strong since spring practice, even though Moore missed the first day of fall camp after his father, Darrin Moore Sr., was found dead July 31.

Moore said the last month has been difficult for him.

“After I came back to camp, I felt like I tried to kind of block it out in my mind and just tried to use it as motivation,” Moore said.

Defenses will definitely have to be mindful of Moore, who has become more comfortable in the offense and has built a strong chemistry with his quarterback.

“Yeah, me and Seth have a real good relationship,” Moore said. “I mean, day after day, in the summer, spring, I mean, getting extra work after practice. We worked a lot together.”

The 6-foot-4 flanker also brings the ability to stretch the field — something offensive coordinator Neal Brown said was missing in 2010.

“He’s a guy that can make a bunch of big plays, probably more so than we had last year,” Brown said.

Five of Moore’s catches were for more than 20 yards and 10 of his receptions were for first downs.

The Bobcats were persistent in playing Moore one-on-one, which led to him using his height and size to bring down passes.

“I got a lot of man coverage,” Moore said. “So, Doege was able to put the ball up and I was able to go make some plays.”