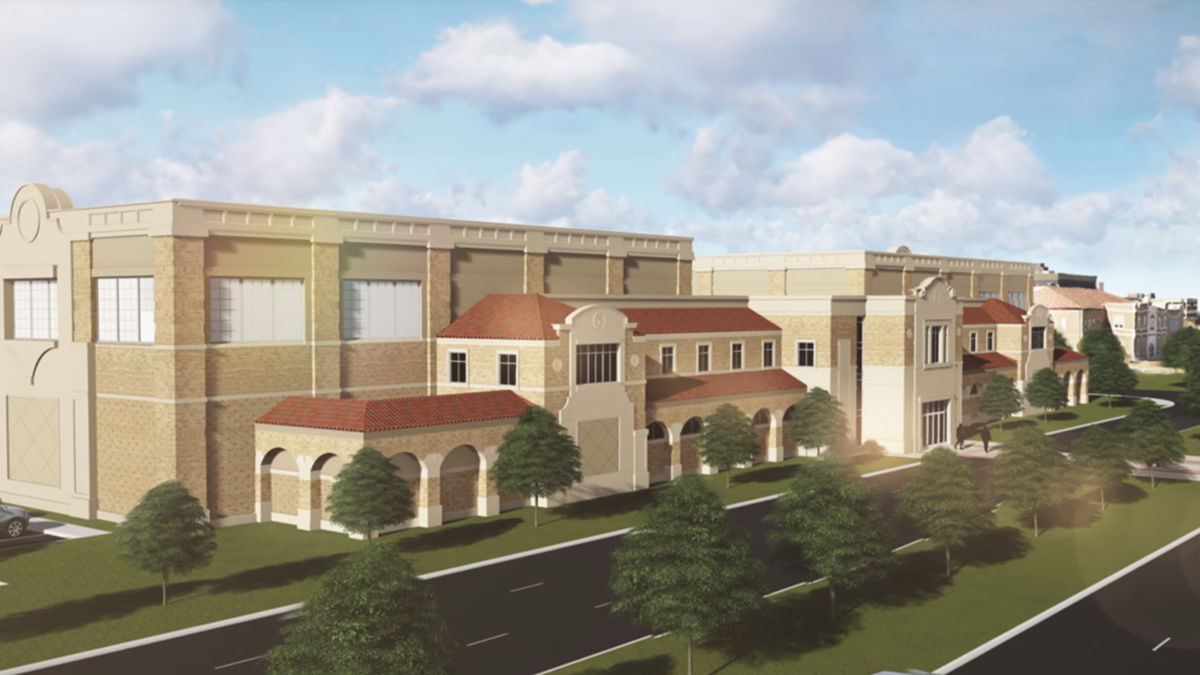 A sketch of the future Dustin R. Womble Basketball Facility. 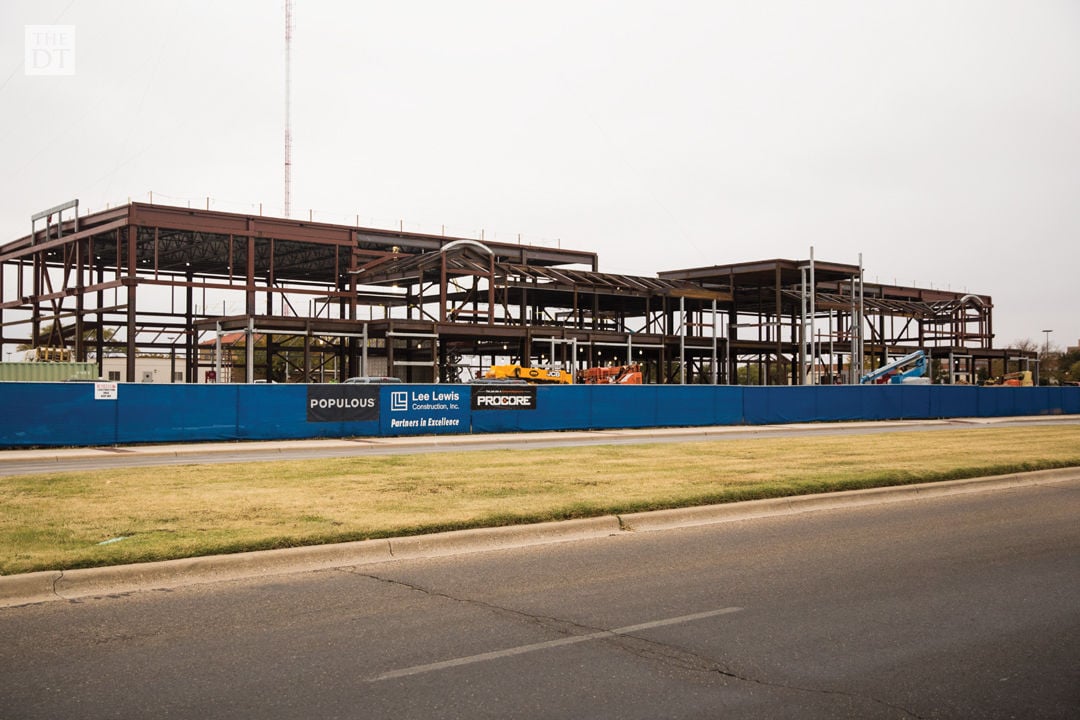 The Dustin R. Womble Basketball Facility remains under construction as of Oct. 29, 2019. The completion of the Womble facility is anticipated in July of 2020.

A sketch of the future Dustin R. Womble Basketball Facility.

The Dustin R. Womble Basketball Facility remains under construction as of Oct. 29, 2019. The completion of the Womble facility is anticipated in July of 2020.

In addition to the multiple campus areas meant to improve learning, facilities are being developed to improve the college lifestyle of student athletes.

Billy Breedlove, vice chancellor for Tech System Facilities Planning and Construction, said the Womble is expected to be completed in July.

Regarding the internal parts of the Womble, Breedlove said Tech Athletics makes decisions on the type of basketball court put into the facility and other features, such as lighting and features related to weight training areas. He said strength and conditioning coaches help to select equipment for the training areas as well.

“Anything from what kind of lockers they want to the furniture, the video capabilities of where the cameras go in the gyms, security. It’s all very unique,” he said. “It’s a very cool athletic project.”

The design of the Womble is another aspect of the project Breedlove said adds some challenges.

“It’s going to have the Spanish Renaissance design on it, which is kind of challenging because it’s such a large facility. To really do that can be costly if you’re not careful,” he said. “It has got some very unique features in it.”

One reason for this design challenge is the Womble being close to the USA, Breedlove said.

“It’s kind of hard when you’re designing that new building, the Womble. It’s got to relate to the USA building architectural-wise,” he said. “We’ve tried to use some of the design details from the USA also on the Womble and kind of marry those two together.”

Four sections of mosaic tiles on exterior walls of the Womble will be the public art that goes with the facility, Breedlove said.

Despite the multiple aspects of the Womble, the center may impact the Tech community in different ways.

Sydney Goodson, women’s basketball junior guard, said she is excited for the Womble.

“I think I’m really looking forward to having our own court,” she said. “I think that’s going to be so cool.”

“I think we’re all just excited to have more of our space,” she said reading the team’s attitude toward the facility and its access to a new practice court, locker room and training room.

During the groundbreaking ceremony for the Womble on Jan. 25, men’s basketball head coach Chris Beard said the facility will change the program.

“When we look back one day, this will be one of the biggest monumental things to ever happen to Tech basketball,” he said during the groundbreaking.

The Womble will have a similar impact to the program as did the USA and the Lubbock Municipal Coliseum, Beard said at the groundbreaking.

“College basketball is all about players, and what you got to do is you got to recruit them, and you got to coach them,” Beard said during the groundbreaking. “This facility will impact recruiting more than anything possibly could. Simply stated, it’s going to be the best basketball training facility in the country, and it will enable us to recruit a different kind of player.”

The Womble will take the development of athletes to another level, Beard said at the groundbreaking.

“We get asked all the time as coaches, ‘What’s the significance of this new facility?’” she said during the groundbreaking. “For me and our staff, it’s about performance.”

In addition to the impact of the Womble, the Tech community may also benefit from the Cash Center in a variety of ways.

“We’ll finish that building by the end of the year,” Breedlove said regarding the Cash Center. “So, in the spring, when the athletes come back, they will be able to be served in that facility.”

Delays because of weather and working with underground utilities are difficulties Breedlove said were faced during the construction. But the final product will provide multiple opportunities for student athletes.

The Cash Center, which will have stained glass on the main foyer, is expected to serve about 200 athletes at a time, Breedlove said. At this dining facility, there will be different dining environments and multiple food-serving stations.

“I think it will be a very cool environment for the athletes. It’s good for recruiting,” he said. “It’s going to turn out very nice.”

Dayna McCutchin, director of sports nutrition at Tech Athletics, said the Cash Center food will mostly be in house versus catered.

“We’ll also have a global fair that will rotate every three days as well,” she said.

In addition to the in-house options, McCutchin said there will be opportunities for partnerships with local food establishments to cater at the Cash.

“We’re just really really excited for the opportunity to just better our athlete’s options to be able to meet their performance goals,” she said.

The dining area of the Cash will have a sports bar feel, McCutchin said. The facility will be tailored toward athletes, so making the facility feel like a typical dining hall was an aspect to avoid.

“It’s really cool for them to all kind of be together and around one another, again as a family,” she said regarding athletes of other sports teams who may not spend much time together. “Again, outside of maybe academics and some other organizations that are athlete-specific, this is just another opportunity that they could kind of be all together.”

Despite the lack of a dining hall theme, McCutchin said the ordering system will be similar to that of The Market in the Stangel and Murdough residence halls.

“There will be menu boards above all the stations that will kind of highlight what they’re doing,” she said. “Everything will be ordered from an iPad.”

Once an order is ready, a number will pop up on a screen, McCutchin said.

Along with the multiple food options, McCutchin said there will be resources to help athletes know which foods they need to eat. She said a staff will be present to help athletes select the best food based on an athlete’s nutritional requirements.

“All of our items will be labeled based on our performance system,” McCutchin said regarding another resource to inform athletes about nutrition. “So, they’re all color-coded. Along with that color coordination system, there also is a coordinating pie chart.”

Using the pie chart, McCutchin said an athlete will know how much of a certain type of food they need to have in their meal.

“Our athletes will be able to build their own tailored performance plate based on all of our individual items being color-coded,” she said. “It just simplifies the process a lot for them.”

The staff will also create a system using labels to depict foods with high fiber, sodium, antioxidants and other unique nutritional characteristics. This information will be denoted on the product.

The nutrition facts and labeling system may not be the only educational opportunity in the Cash.

A cooking lab will also be housed in the Cash for student athletes to learn how to prepare meals, McCutchin said.

“We are creating basically a curriculum. Kind of a starter, introduction to cooking,” she said. “So, what will happen is our athletes will basically go through our starting curriculum.”

After completing the beginning curriculum, athletes will get the opportunity to take part in cooking classes, McCutchin said. Guest chefs will conduct these classes, and student athletes will cook alongside those chefs in residential cooking labs.

“It just gives our athletes the opportunity to improve on their life skills,” she said, “and that’s something they will take with them when they leave here.”

Despite the amount of information an athlete has about nutrition and what to eat, McCutchin said an athlete needs to know how to prepare their own meals.

“We’re going to take the opportunity to try to educate them as much as possible with this dining facility,” she said.

Regardless of the educational opportunities, the Cash facility cold be beneficial for athletes for a number of reasons.

The Cash Center is a resource Goodson said will provider newer options that are healthier for her.

“I think they will have a lot more options that are a lot more fresh,” she said. “I think they’re going to get more organic stuff, which will be awesome. Just another tool, another resource we get to use that Texas Tech offers.”

Whether it be the Womble or the Cash, student athletes are expected to gain a variety of resources that they could use throughout their time at Tech.

“Texas Tech takes care of us like none other,” Goodson said. “That’s huge.”