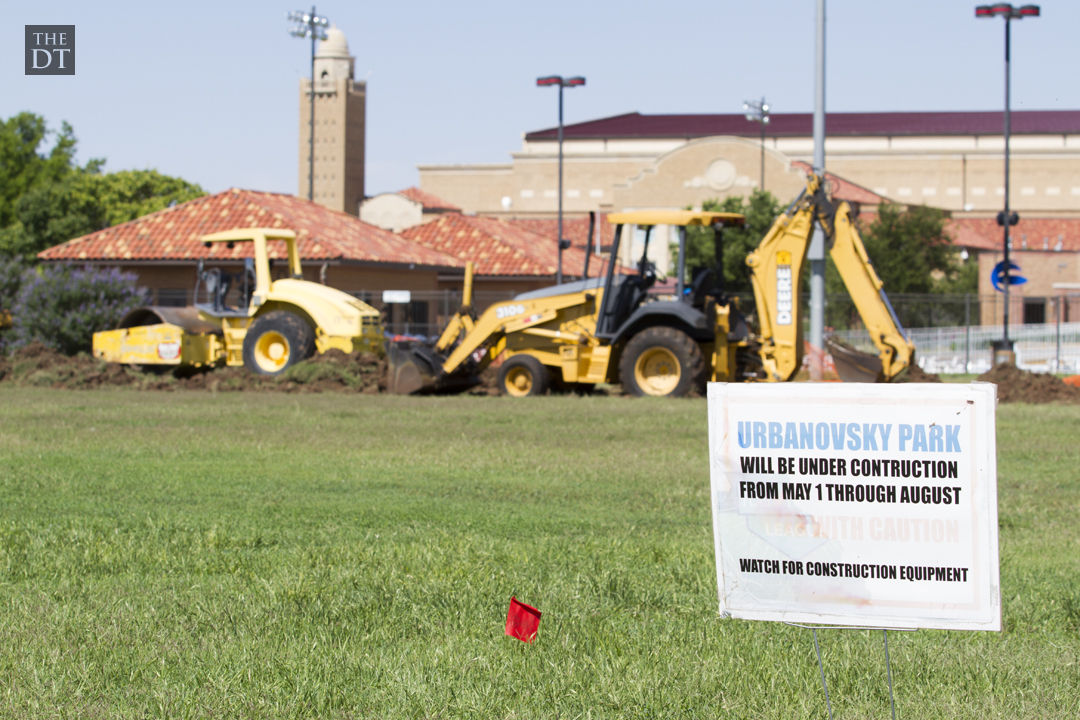 Urbanovsky Park is under construction this summer at Texas Tech. The renovations will include an amphitheater, new jogging trail and a pond. 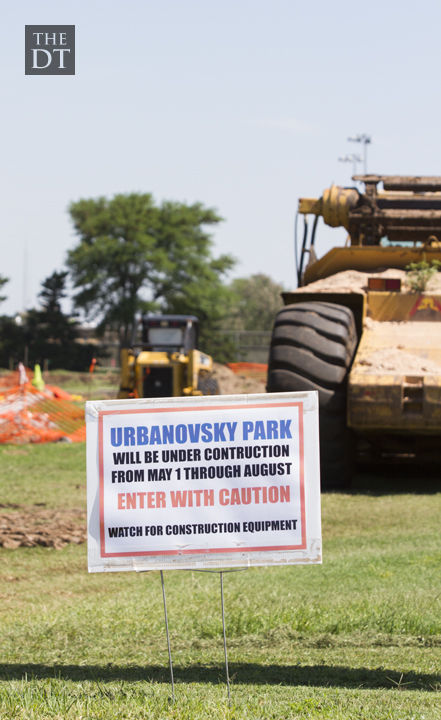 Renovations to Urbanovsky Park began in May and will bring various new amenities to the area located outside the Robert H. Ewalt Student Recreation Center, including a pond and a fountain.

Urbanovsky Park is under construction this summer at Texas Tech. The renovations will include an amphitheater, new jogging trail and a pond.

Renovations to Urbanovsky Park began in May and will bring various new amenities to the area located outside the Robert H. Ewalt Student Recreation Center, including a pond and a fountain.

Those walking past Urbanovsky Park on the Texas Tech campus have likely noticed the park is currently undergoing renovations. The project will result in new features being added to the park, including a pond and fountain, renovated jogging paths, outdoor amphitheater and additional basketball and sand volleyball courts.

“We wanted to create more of a park space similar to what you would see in some of the great city parks around the country,” Michael Molina, vice chancellor of facilities planning and construction, said.

Started in 2013, the Tech Campus Beautification Project has brought several changes to the campus, including the renovated Broadway entrance and the Library Mall courtyard. These initial projects were completed in Spring 2015, signaling the start of the last phase of the campus beautification project, the Urbanovsky Park renovations, Molina said.

Near the new basketball and sand volleyball courts, there will soon be an additional gazebo, new seating/barbecue areas and several new trees. In fact, according to the official Facilities Planning and Construction map, these trees and picnic areas will be placed along the middle of Urbanovsky’s eastern field, allowing the field to be used for both intramural and park-type events.

“You can still have five man football and flag football here, as well as room for Frisbee or more park-type events, versus just intramural field events,” Molina said.

Unlike the eastern fields, the southern rugby field would remain unchanged, he said.

Near the current sand volleyball courts, construction will soon begin on a new pond. Molina said this pond will be aerated and will contain a water filtration system, keeping it free of algae, moss and other buildup.

The pond will feature a fountain and will be outfitted with a combination of decks and large limestone edges for students who want to relax or have a picnic, Molina said.

On the hill near the corner of 18th Street and Flint Avenue, Facilities Planning and Construction will create an outdoor amphitheater, Molina said. Large slabs of cut limestone will be embedded into the hill to create embankment seating, and new trees will create a shade canopy to cool the seats on hot days.

A new stage will be constructed at the bottom of the hill, providing the campus with an operating outdoor amphitheater, Molina said. Next to the amphitheater and the pond, two gateways will be built to announce the park to students and visitors.

For students who visit Urbanovsky for its jogging path, Facilities Planning and Construction has planned an altered jogging path with more inclines and safer pathways.

The jogging trail will be rerouted away from the front of the Robert H. Ewalt Student Recreation Center, Molina said, as joggers previously had to run across parking lots and next to roads. Molina said Tech will add many new trees to the park, meaning the new jogging path will be farther from roads and closer to foliage.

For a challenge, Facilities Planning and Construction plans to use the dirt from the new pond to create inclined jogging paths, Molina said. After creating four different hills throughout the park, joggers will be able to take an optional path up the inclines, or remain on the flat jogging path.

“People will really appreciate the space. There are some open zones, lanes of trees, landscaping and even some undulations around the park and trees,” Molina said. “It’s going to be quite impressive.”

Lastly, for athletes who want a full body workout, the renovated Urbanovsky Park will feature a new CrossFit Zone. Molina said new CrossFit equipment will replace the current outdoor exercise area at the corner of Main Street and Flint Avenue.

Molina said these renovations, along with the addition of the West Rec Turf Field Complex, will help Tech’s growing pains as the student enrollment increases.

Sean Gillespie, a junior mechanical engineering major, said he is glad the university is improving the park.

“I think anything to make it look nicer and attract more people is nice,” Gillespie said. “I like the running trail idea, because I have ran the trail, and it does take you around the parking lot.”

“I can tell you, before students return in the fall, the project will be completed, weather pending,” Molina said.

You have done a great job. I will definitely dig it and personally recommend to my friends. I am confident they will be benefited from this site.
clash of clans astuce

The content is always interesting to me, I like the good things from it, thanks for the great content,... Couple shirts, valentine's day gifts, Prince and Princess Shirts

I like the post design as you make client engagement in the entire article. It appears to be round up of every single distributed post. A debt of gratitude is in order for checking the instructive posts.