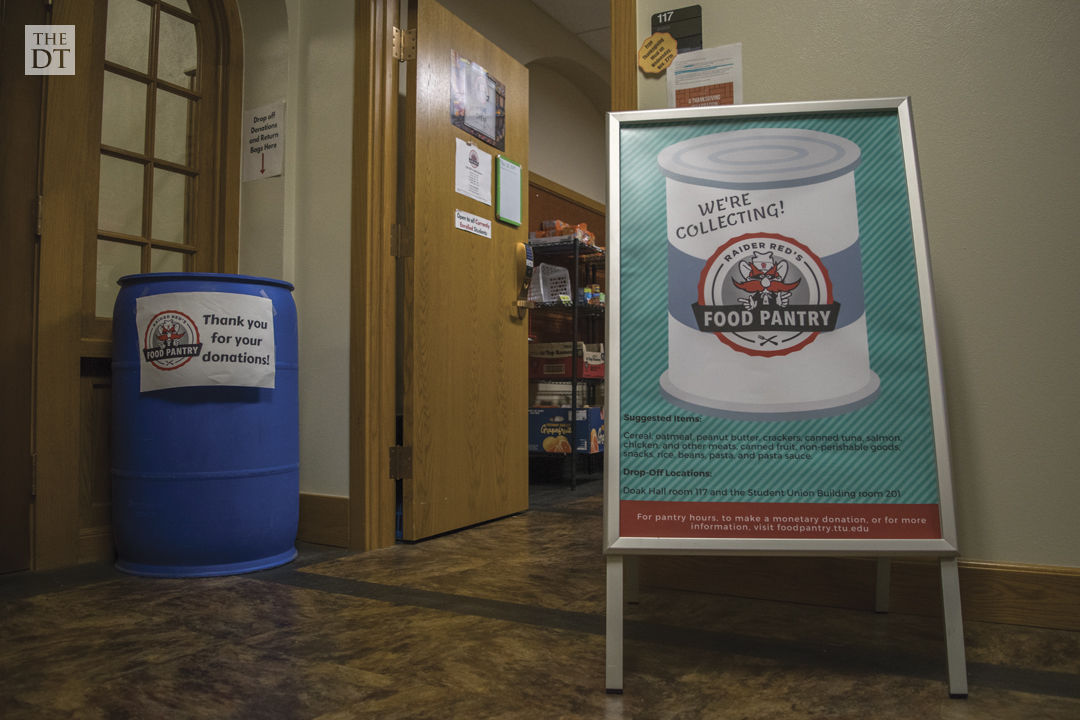 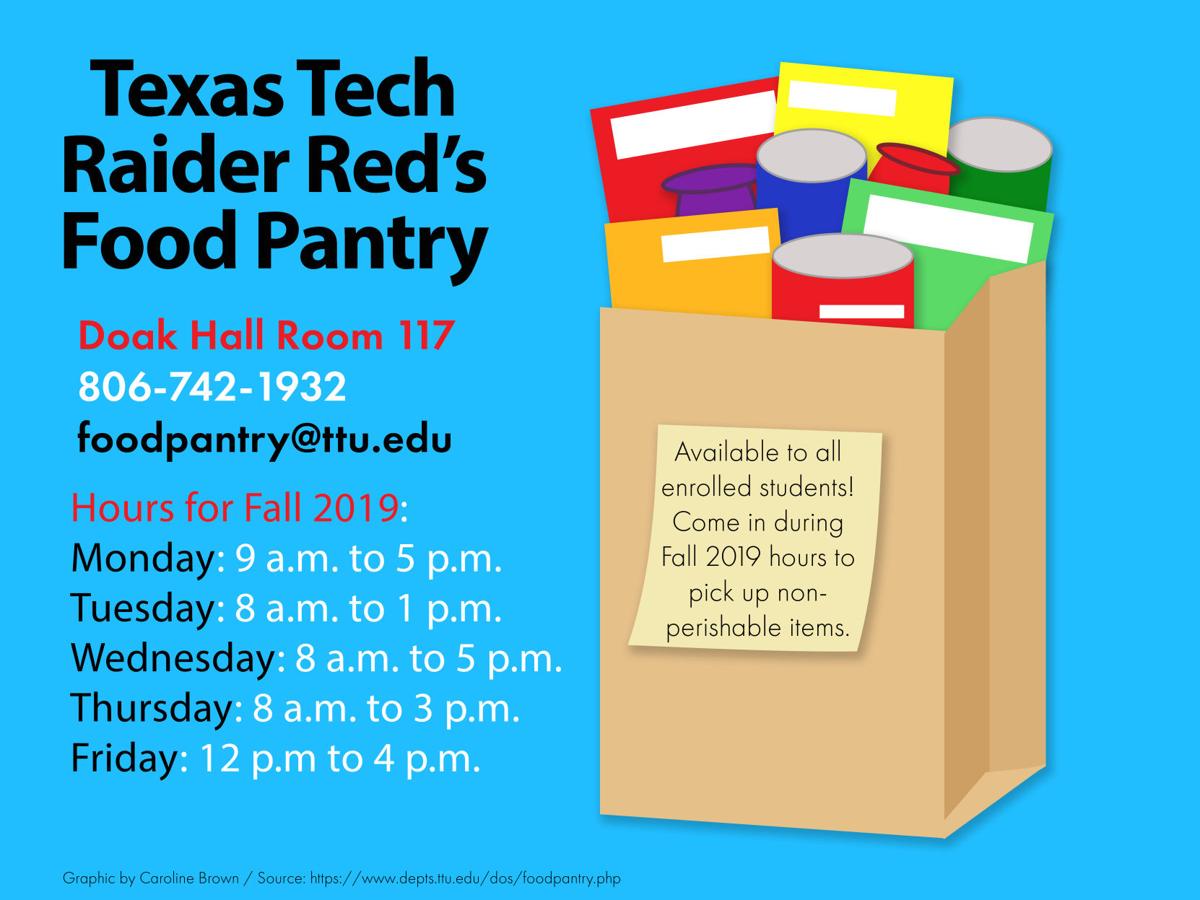 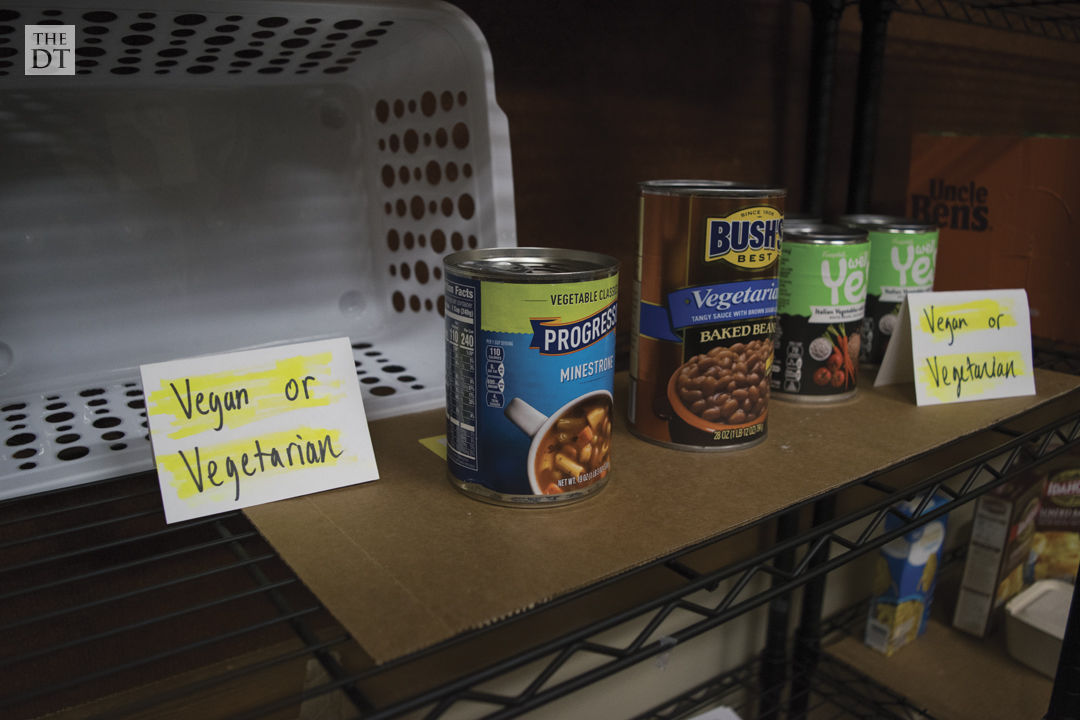 As the holiday season is underway, food insecurity becomes a problem for some students. Through additional efforts from the Texas Tech community, one campus resource continues to combat this issue.

Raider Red’s Food Pantry is a Tech resource, located in Doak Hall Room 117, that allows students who are not able to buy food or ingredients to obtain free items on campus.

Regarding the current fall semester, Hinojosa said the number of pantry visitors each week has surpassed the previous fall semester’s visitors.

At the pantry, students can pick up non-perishable food items, which people donate to the pantry, and can get information regarding recipes and additional campus resources, Hinojosa said. Students who want to access the pantry need their student ID and will fill out an intake form.

A graduate student and a social work master’s student, who is undergoing a practicum, staff the pantry, Hinojosa said. The pantry’s hours of operation, which can be found on the Tech Office of the Dean of Students website, vary each semester depending on the schedule of the staffed students.

“If for any reason a student is unable to visit the pantry during our staffed hours, they can call [806-742-1932],” she said regarding how someone can open the pantry for a student outside of the staffed hours.

To donate to the pantry, Hinojosa said one can bring non-perishable food items to the pantry or to the Student Union Building Room 201. Cash or check donations need to be done in SUB office and card payments can be done online through the Tech Institutional Advancement website.

During the time it has been available on campus, the pantry has provided a variety of ways for the Tech community to help those facing food insecurity.

Food insecurity is an economic, social and physiological condition that can take the form of low food insecurity, which is reducing the quality or desirability of diet with little to no signs of reduced food intake, or very low food insecurity, which consist of multiple signs of reducing food intake and disrupting eating patterns, according to the “When Students are Hungry: An Examination of Food Insecurity in Higher Education” research paper. In a 2018 Wisconsin HOPE Lab national survey, 36 percent of 43,000 students from 66 higher education institutions were reported to have been food insecure 30 days preceding the survey.

Different methods may be utilized to promote the pantry and bring in more donations to further combat food insecurity on the Tech campus.

Kristian Hart, Student Government Association at-large senator and junior public relations major from Mineral Wells, said after learning a little more about the pantry through a TechAnnounce, she later realized the number of students who utilize the pantry.

“I think one of the problems is also keeping a lot of people up there to help,” she said.

Shopping for groceries to keep the pantry stocked is one task Hart said Hinojosa has to do by herself. She said SGA is trying to take the load off her and the pantry staff.

Keeping the pantry stocked is another issue, Hart said.

“The more that people will find out about it, the more people who are going to visit,” she said, “We need a very consistent donation base.”

Spreading awareness of the pantry is one goal Hart said SGA has.

“Right now, we’re trying to get some graphics made that are going to be displayed on the electric screens in the [Rawls College of Business] and also in [the College of Media and Communication building],” she said. “We’re also going to be doing a little bit of paper advertisement.”

Tabling and having additional volunteers at orientation are other ways Hart said SGA members want to inform people about the pantry.

“We also want the students, when they come through orientation, we want them to know you don’t have to go without eating,” she said regarding how people should not be embarrassed about using the pantry.

To bring in additional donations, Hart said SGA wants to reach out to American Campus Communities. Being able to reach out to students, whether they are leaving the dorms or leaving their off-campus housing, and encouraging them to donate their non-perishable food items to the pantry can be beneficial.

Adam Disque, Tech SGA graduate vice president and fifth-year environmental engineering graduate student from Wylie, said he started to learn more about the pantry as he was becoming an SGA executive.

“As part of my turnover with continuity being the graduate vice president, this was something that I got to read about,” Disque said.

Getting more student organizations involved in volunteering and raising awareness for the pantry is one method Disque said would be beneficial.

“We’re trying to do a lot of the advertisement to help support it,” he said. “But student organizations could do the same thing.”

Since some SGA members also are members of different student organizations, Disque said SGA could make an impact on helping the pantry. From an SGA perspective, he said executives and senators can make an impact in other ways.

“We get to sit in with meetings with campus leadership,” he said regarding some responsibilities as an executive in SGA. “We get to propose the changes to business models that we see across campus. Food insecurity, from that perspective, was really interesting.”

Looking at the infrastructure of Tech and making decisions on who to meet with and how to garner support are factors SGA needs to consider, Disque said. Even though the pantry is helping some students who are facing food insecurity, the issue is still prominent on college campuses.

Matt Gregory, Tech dean of students, said he has heard of stories and studies regarding students at other campuses dealing with food insecurity.

“We keep those kinds of situations in mind that we hear from across the country and knowing full well that could be an experience of one of our students here at Texas Tech as well,” he said. “I think it’s just good measure to make sure that we’re providing for our students or have resources or support available for our students.”

Regarding the responsibilities of Tech Student Affairs and the Office of the Dean of Students, Gregory said the staff works to provide support for students, such as those using the pantry, who are facing a challenge that can distract from being productive in school. He said the students who utilize the pantry need food and are not taking advantage of it.

“That’s the type of need we want to provide for,” Gregory said regarding food insecure students.

“There’s always opportunity to improve upon our current Red Raider Food Pantry to make sure we’re meeting the needs of our community,” he said. “Sometimes, those needs are things that we don’t even know yet, but other schools might have saw some need and figured that out.”

Along with groups on campus and utilizing knowledge surrounding food insecurity on college campuses, there may be other ways the food pantry can improve and reach more students.

Kimberly Thornton, senior director for the Center for Campus Life, said the staff in her department were really happy to get the opportunity to charge of the pantry when it was starting.

Regarding helping food insecure students, Thornton said she has heard a lot of stories of faculty members spreading awareness of the pantry through word of mouth. Through this avenue, she said the department can help students.

“A lot of faculty will tell us it’s really nice to have because if we see a student that looks hungry, we can send them to the food pantry,” she said. “We can get them help, and they can do better.”

Faculty and staff know about where to a refer a student who is facing a certain issue, such as food insecurity, Thornton said. People also learn about the pantry through food drives and other donation opportunities.

Another way to bring in more donations and raise awareness for the food pantry is the CANstruction event in February, Thornton said. Student groups can compete against other groups by building structures out of canned goods, which will later be donated to the pantry.

Regardless of the multiple ways the Tech community can get involved in supporting the pantry, support may come from outside of campus as well.

Local organizations will host food drives in an effort to provide donations to the pantry, Thornton said. This is another way groups can get involved.

In addition to these local partnerships, with the upcoming H-E-B in Lubbock, the supermarket chain granted Raider Red’s Food Pantry a $25,000 check, Thornton said.

“A way they give back is they identify different agencies within the community that they’re coming into,” she said regarding H-E-B. “They saw that we had a food pantry, and it lined up with their mission, and they handed us a $25,000 check to help make the food pantry better.”

The department is still working to figure out how to effectively use the money to benefit the food pantry, Thornton said.

Despite the variety of methods that could benefit the food pantry, directing food insecure students to the pantry and other campus resources may be the first step one needs to take to help those they know who may be struggling with paying for meals.

Elizabeth Massengale, managing director of Tech Parent and Family Relations and assistant dean of students, said with this holiday season, people tend to see a lot of food drives and opportunities to donate money and other necessities to people. She said this can heighten awareness toward those who are struggling with food insecurity and money.

“I don’t know if students, on a day-to-day basis, realize there are other students in their classes that are food insecure or are having financial difficulties that are making life here harder,” she said.

“It’s all connected,” she said regarding struggling students. “You’re not just food insecure, there’s other things happening that you also need help with.”

What is your favorite Valentine's Day gift?