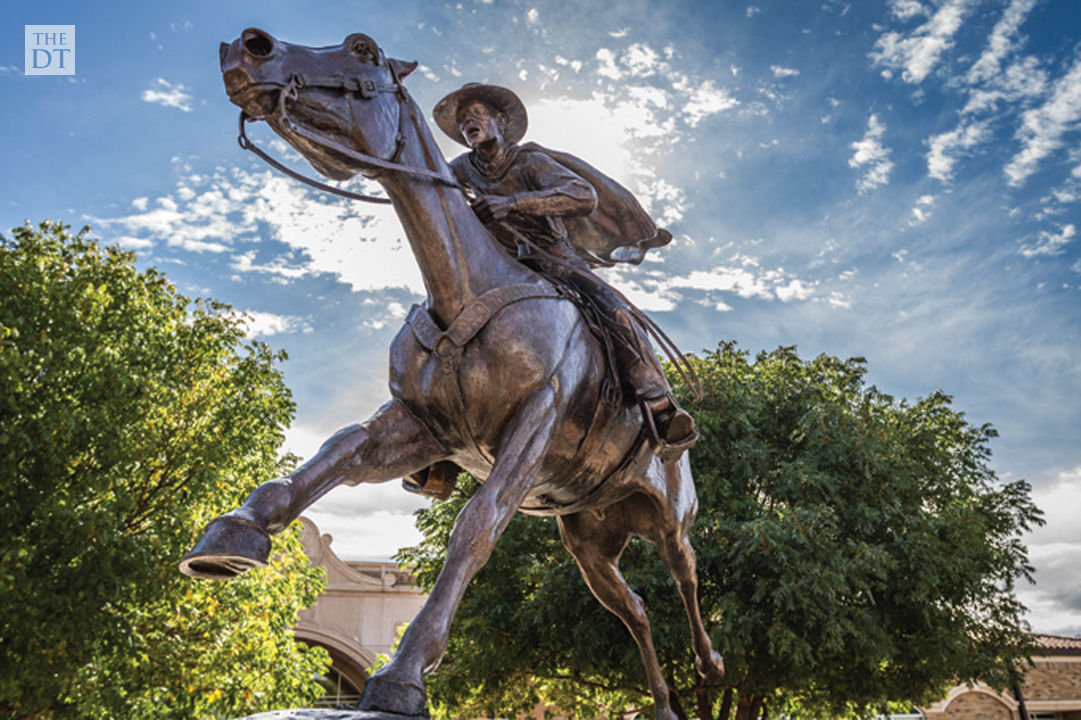 The Masked Rider statue, located behind the Frazier Alumni Pavillion. It is part of the Texas Tech Public Art program. Emily Wilkinson, the director for public art for the Tech University System, said the Public Art program has made a large impact on Tech and makes the campus and Tech System unique. 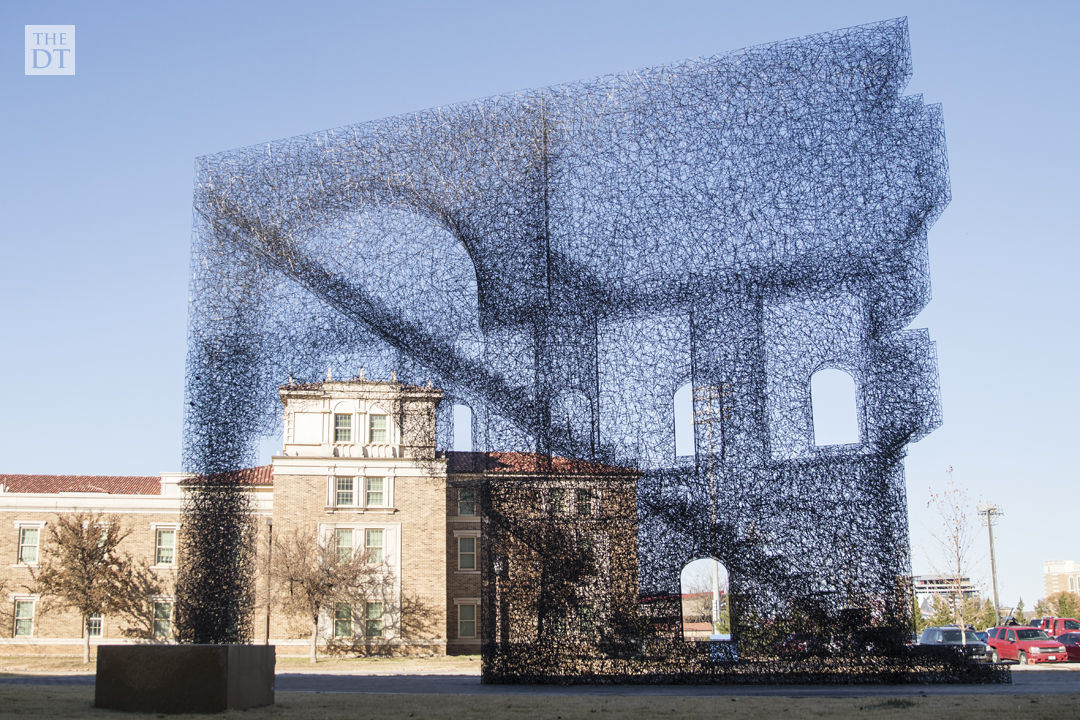 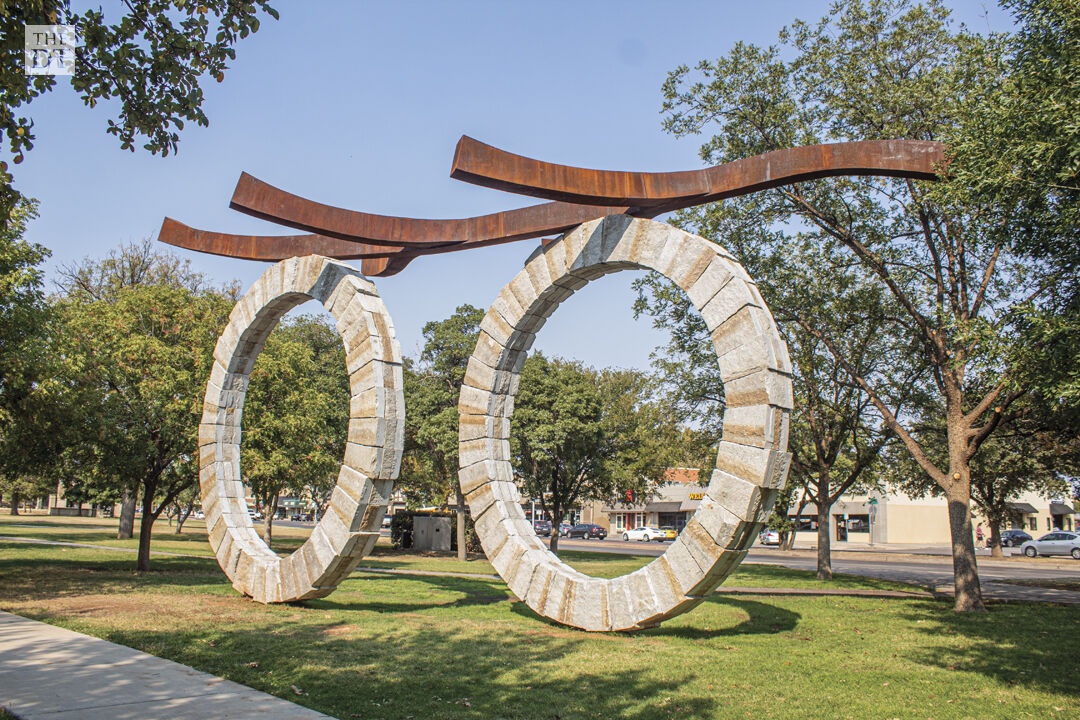 "As Far As the Eyes Can See", a sculpture created by Ilan Averbuch, is the newest piece of public art on the Texas Tech campus located in front of Weeks Hall facing University Ave. 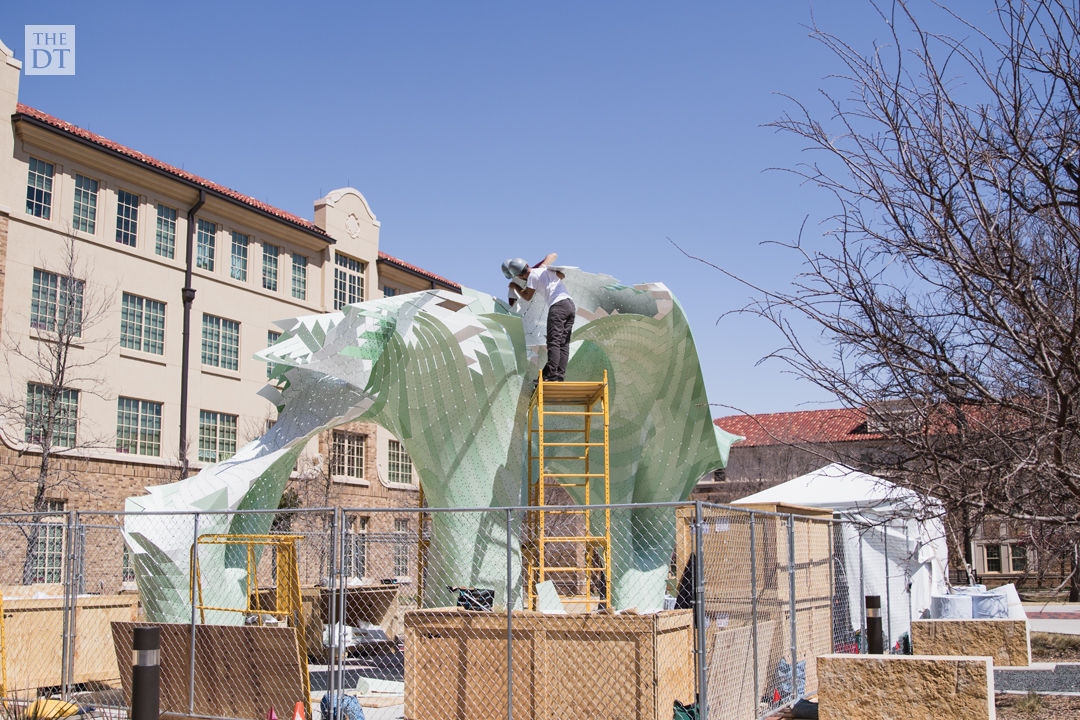 One of the first things people notice when arriving at Texas Tech is the variety of public art projects displayed throughout campus.

With these multiple art pieces, people tend to wonder what is considered to get these projects established.

Emily Wilkinson, public art director for the Tech System, said she along with a committee supervises the entire process of picking an artist to the day the work is complete and installed on campus.

“We have a group called the University Public Art Committee; they’re the ones selecting the artists,” she said. “We have artists apply for projects when we have a new construction project that has been approved. Artists will apply to be our selected artist for the project. The committee will vote on the artists that have applied, and the artists with the most scores on their first application will be selected as finalists."

As finalists, artists will propose their final idea for a project, and the committee will interview them and select their top choice that day, Wilkinson said. The selection will be taken to the president of the university in which the project will be established and the Tech System Chancellor for final approval.

Every building at Tech looks similar because of the Spanish Renaissance aesthetic the school has embraced, Wilkinson said the public art does not need to follow that aesthetic.

“We want the art to speak about what is happening academically inside the building,” she said. “The public art distinguishes the buildings from each other by giving them their own personality, and we really try to make sure that in the job application that the artist knows what building the piece will be for.”

There is a free app available to everyone called ArTTrek, which will give a user information on a selected public art piece, so one has a better understanding of the meaning behind the art, Wilkinson said.

An art project will not actually begin until the proper funding is allocated, Wilkinson said.

"The funding for public art pieces is connected to all major construction projects of $4 million and above across the Texas Tech University System," she said. "One percent of the overall construction budget is allocated for public art."

Scott Lacefield, executive director of media relations and communications for the Tech System, said the public art program is among the top collections in the country.

"The Texas Tech University System’s Public Art Collection has been named one of the top 10 university public art collections in the U.S. by Public Art Review, which is the leading journal in the field of public art," he said. "The collection includes some significant artists – some who are local and also some world-renowned artists from across the globe.”

Lead Pencil Studio is an art studio based out of Seattle, Washington. The artists duo Annie Han and Daniel Mihalyo have displayed their art across world, which includes the Tech campus. Their piece, Oblique Intersection, is in front of the Experimental Sciences Building II.

“We applied, and we were among four or five finalists to be interviewed for the project,” Han said. “We went through the interview process. However, usually for an interview, there is about five to eight people, but in Lubbock, we walked into a lecture hall with a huge group of people for the interview.”

When Han and Mihalyo were visiting, Han said they were struck by the Spanish Renaissance influence in the campus architecture and thought about what a university goes through when they identify themselves through the buildings.

Their experience with large projects has helped to assess the time and amount the project was going to cost, Han said. When pitching their idea, they shared their thoughts about the campus and what the influence of the architecture was.

They came up with an image that was a piece of Spanish Renaissance architecture, Han said. However, they did not want it to be easily identified, and they wanted to change the angle of the piece.

“The piece itself changes based on your perspective angle,” she said. “In some points of view, it looks like a tumbleweed in a certain way but as you walk through and your eyes align with certain openings then you can begin to recognize parts of architecture from it.”