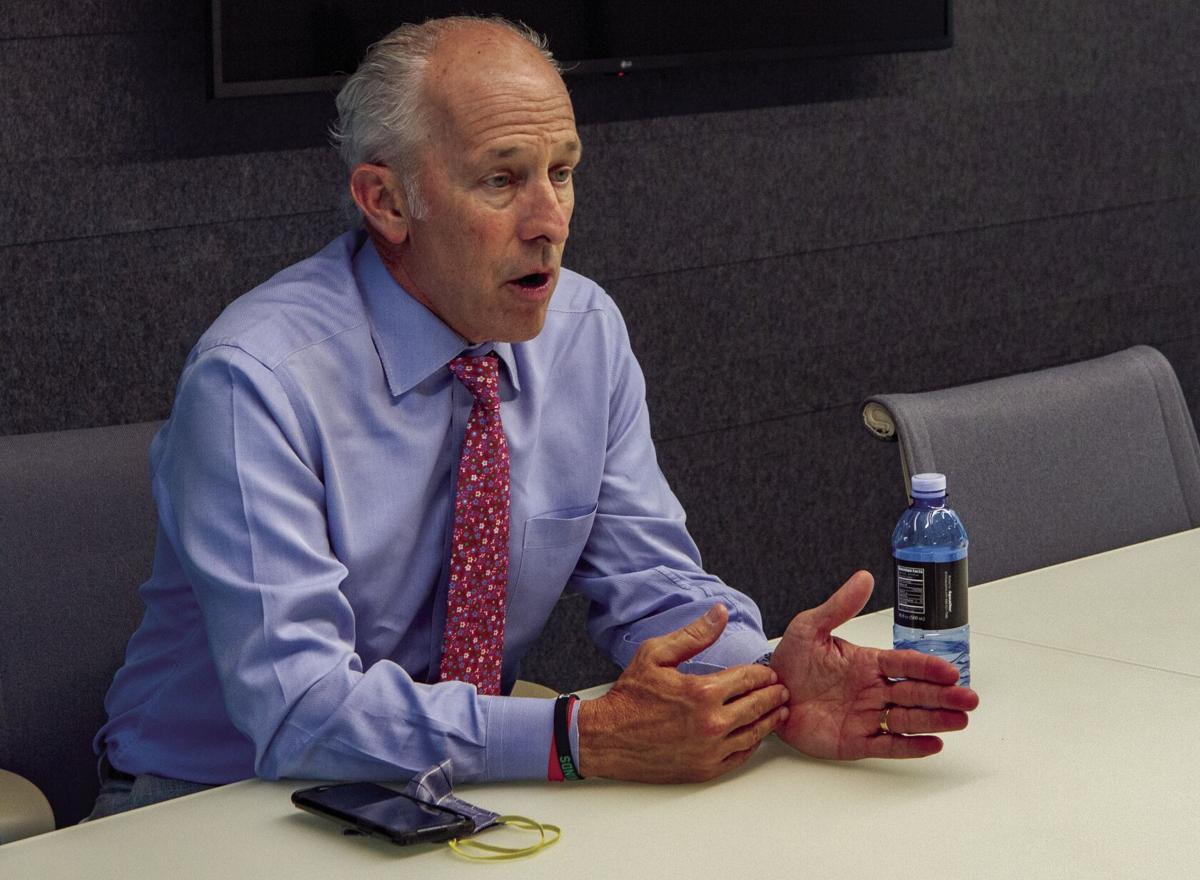 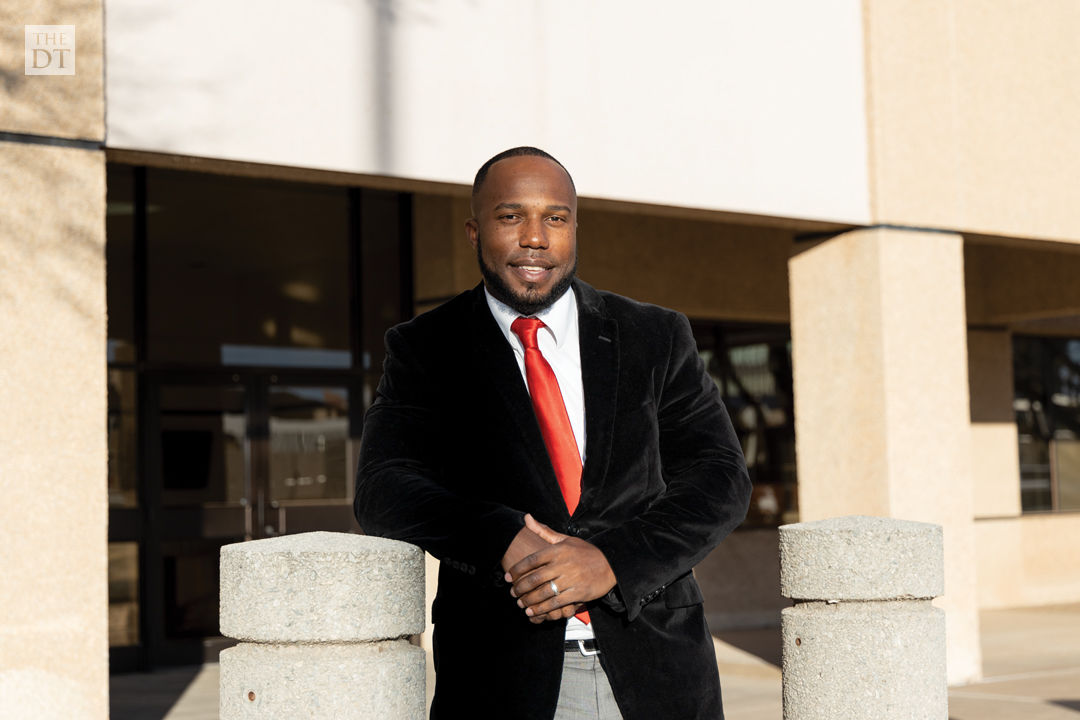 Stephen Sanders, a junior advertising major from Lubbock, is running for Lubbock mayor. Sanders is a father and keyboardist looking to improve the Lubbock community.

Stephen Sanders, a junior advertising major from Lubbock, is running for Lubbock mayor. Sanders is a father and keyboardist looking to improve the Lubbock community.

The presidential race is not the only election locals have been anticipating, as incumbent Dan Pope and Texas Tech student Stephen Sanders will face off for the position of Lubbock mayor.

In this year’s Lubbock mayoral election, which was pushed from May to this November because of the threat of the COVID-19 pandemic, Sanders and Pope have worked to garner support for their respective campaigns.

Heading into this election, issues, such as operating the city during the COVID-19 pandemic, representation for underrepresented individuals and more, can affect which candidate Lubbockites want to support.

As COVID-19 continues to impact multiple aspects of life in the City of Lubbock, public health and how the city continues to function can be a concern for some voters.

Sanders, a junior advertising major from Lubbock, said the city needs to listen to what doctors recommend to stay safe during the pandemic. He said he would make any decision based on those recommendations.

“I would never shut businesses down, that’s for sure,” he said. “We would never shut down businesses because we know more about COVID-19 now, and we know how to combat it and how to keep things safe and work with the health department and all the different entities we have.”

Being able to open all businesses is a goal Sanders said he would love to reach to better the city’s economy.

If re-elected, Pope said the city will continue to respond to the pandemic with the safety of Lubbock citizens being the priority.

“So, anything we do will be sort of looked at through that lens,” he said, “and, right now, I think reopening right now is more at [Texas Gov. Greg Abbott’s] pace and desires. We made some decisions early on, but he took the keys away from us, and that’s good; we support that. But we want to safely do all we can to get our economy back open.”

Pope will continue to encourage citizens to practice good hygiene, whether that be washing hands or wearing a face covering, he said.

City involvement regarding public safety is another issue voters may consider when selecting a leader for their city.

With national discussions about police brutality and funding for police in recent months, how a prospective mayor addresses certain public safety issues could impact a voter’s decision.

Even though police, fire and emergency management report to the city manager, Pope said the mayor has responsibility over the budget. Regarding the fiscal year 2020-21 budget passed in September, he said public safety is fully funded.

“We had no discussions of defunding police,” he said. “We think that our citizens want safe homes, neighborhoods, businesses, churches, whether it’s police, fire, emergency services. So with that in mind, I would mention that our practices have changed.”

The 8 Can’t Wait campaign, which encourages cities to enact eight policies aimed at changing policing strategies, is a movement Lubbock has responded to after the death of George Floyd last May in Minneapolis, Minnesota, Pope said. Updating certain policing tactics is a task the city has been working on for years.

“Our citizens expect that policing and fire work keep up with the new practices but all with that foundation of providing safety,” he said.

Similar to Pope, Sanders said defunding the police is a step he would not undertake.

“I’m going to stand on that and make that promise to the community that that will never happen,” he said regarding defunding the police.

Even though the budget already is put in place, Sanders said the city has to be conservative in how it spends its money, especially regarding public safety.

“So, I think that we’re gonna probably tighten our belts a little bit,” he said. “Probably, won’t be buying anything new or extra right now just because COVID-19 being still in place.”

In addition to these issues that have impacted many cities within the nation, certain local issues still may be a point of discussion when voting for a mayoral candidate.

The need to provide support for citizens in east and north Lubbock is another issue Sanders said he wants to focus on if elected.

“So, what I’m going to do is make sure that we have to clean up those areas and get them nice and get them prepared,” he said, “and then, once we do facelifts on those areas, then we are able to put together a team to go and advocate before other businesses to come set up shop in east and north Lubbock.”

City leaders need to address the fact that those areas always have been overlooked and are in need of cleaning and support, Sanders said. Money needs to be put directly into those city communities.

“I want to make sure all the money that’s allocated to east Lubbock and allocated to north Lubbock actually makes it to east and north Lubbock,” he said, “Because that hasn’t always been the case, and we know that when we drive through there and look at those areas, they are not as nice and they’re not as kept as the other areas are.”

Laying the groundwork for these areas to have restaurants and easy access to city and Citibus routes is what Sanders said he wants to do to help east and north Lubbock.

Regardless of areas in need of certain infrastructural changes and services, Sanders said all parts of Lubbock deserve attention and help from the city.

“We’re gonna definitely look at it and make sure that we’re doing the best we can by all people in Lubbock,” he said, “not just southwest Lubbock, but east Lubbock, north Lubbock, south Lubbock, west Lubbock, everybody. Everybody needs to get a piece of the pie.”

Taking care of the city’s existing assets while allowing for growth is a difficult task a mayor or a member of the Lubbock City Council faces, Pope said.

In Lubbock, Pope said he believes the city government’s job for the community is to create an environment that is safe and has a maintained infrastructure where people want to invest.

“Now, there are parts of our community where it sometimes takes a bit of a push, and we’ve done that successfully in downtown with some incentives we’ve done downtown,” he said. “We’re doing that, and with our east Lubbock-targeted incentives, so that’s if a business wants to make improvements to their business, inside or outside, we’ll invest if they’ll invest.”

As Lubbock mayor, Pope said he will continue to work on these incentives for these city areas.

East and north Lubbock are parts of the city’s community Pope said are very important to him. He said these areas are not foreign to him.

“I think we have a great asset there,” Pope said, “and we’ll continue to do all we can to better connect all parts of our community.”

Representation for citizens, especially underrepresented groups, within all parts of the Lubbock community is another factor that may be important for voters this election.

When being elected as mayor, Pope said one is meant to represent everyone, even if certain individuals did not vote for that candidate or did not vote at all.

“We’ve worked hard on building better relationships in this community, particularly relationships with our communities of color and police,” he said. “We started in the summer of 2016 with our Community Engagement Task Force.”

This task force consisted of working with the Lubbock Police Department, members of the faith community and local business leaders, Pope said. He wants to continue working on this initiative.

One example of significant change can be seen in Lubbock protests following the death of Floyd, as the protests in Lubbock were peaceful and respectful, Pope said.

Regarding the need for representation of different individuals and groups, Sanders said he will listen to the concerns of different parts of the Lubbock population.

“I have a motto, and my motto is to leave no one behind and make sure that everyone has a voice,” Sanders said, “and so, I’ll be in those communities working with those community leaders, finding out what their needs are and then bringing that before the city council and making sure that their voices are actually heard.”

In addition to making sure people’s voices are heard, Sanders said he wants to act on concerns, whether it be by working with the Lubbock City Council or certain advisory boards in the city.

“There’s got to be some love shown and some resources given to the people who are voiceless and who don’t really understand how all of this stuff works,” he said. “I’m definitely going to be paying attention to that.”

Letting communities, such as those in east and north Lubbock, know about city council meetings and other opportunities to voice concerns is a task Sanders wants to undertake if elected.

In addition to accommodating different groups living in Lubbock, focusing attention on college students, whether they are from Lubbock or not, is another aspect of representation the mayoral candidates considered.

Sanders wants Lubbock to be a fun city that college students can enjoy, he said. To better understand the needs of college students, he said he wants to build a relationship with Tech.

Knowing what will prompt students to stay in Lubbock after graduation can be a way to keep students in the Lubbock workforce and impact the city’s economy, Sanders said. This starts with mentoring and getting to know the students.

Similar to Sanders, Pope said being able to keep college students in Lubbock is necessary.

“We think that that’s important to young people, who many come to Lubbock for an education and realize Lubbock is a pretty good place, and they would like to have a job and a career and raise a family here, so we want to continue to create those kinds of opportunities.”

Having a city that is affordable and safe is important for keeping college students in Lubbock after graduation, Pope said. Prior to 2020, he said the city created 10,000 net new jobs in four years, most of which are being absorbed by college graduates.

Regardless of the different plans Pope has if re-elected for his position, he said his business and leadership experience sets him apart from his opponent.

Being able to connect with younger people and being a Lubbock native are factors Sanders said separates him from Pope.

“My whole thing is about empowerment and in helping people meet their expectations and beyond,” Sanders said. “Lubbock is the city of tomorrow, and I will help us to have a bright tomorrow and a bright future, and I’m gonna work my butt off to make sure that happens.”