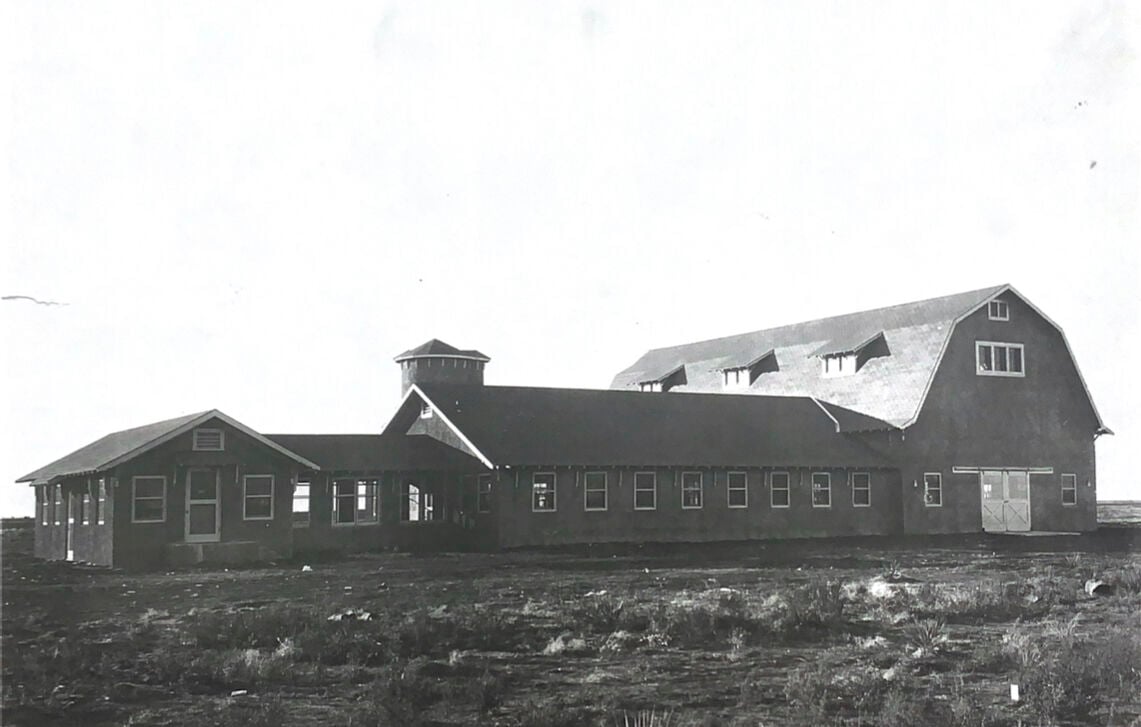 The image shows the original Dairy Barn in 1926. The barn has undergone multiple renovations. On Oct. 15, Tech unveiled its new renovations with a ribbon-cutting ceremony. 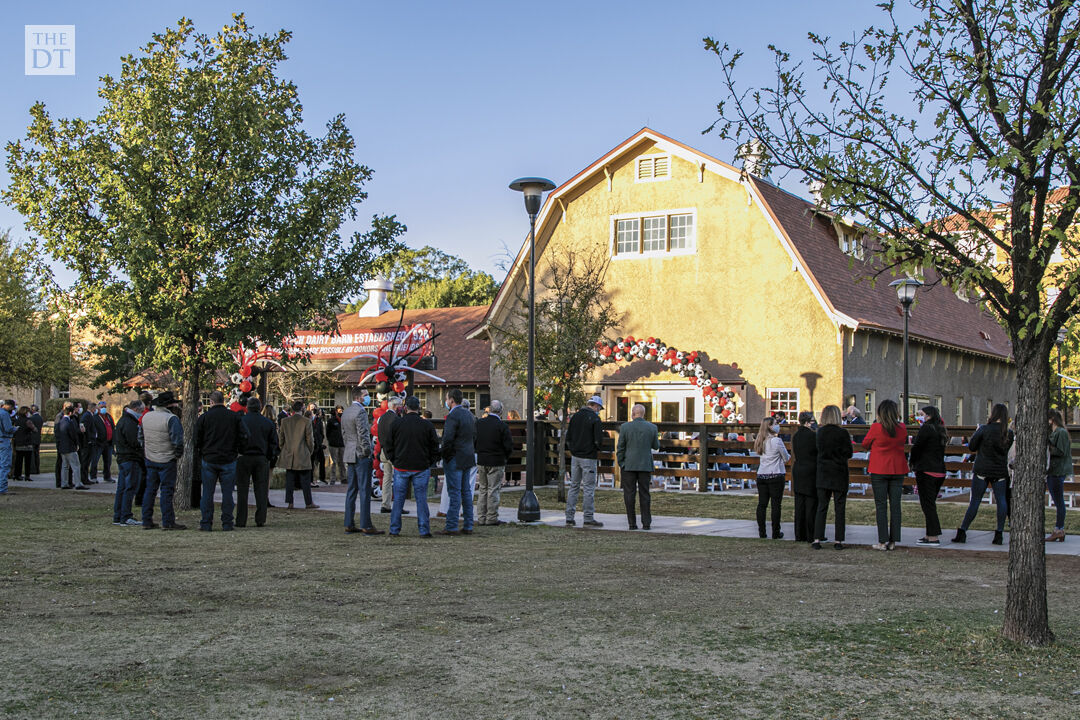 Attendees of the Dairy Barn ribbon-cutting ceremony crowd around the newly renovated Dairy Barn and mingle prior to the ceremony. The Dairy Barn Ribbon Cutting Ceremony took place on Friday, Oct. 15 at 8:30 a.m. at the Daily Barn located on campus at 2906 18th St. 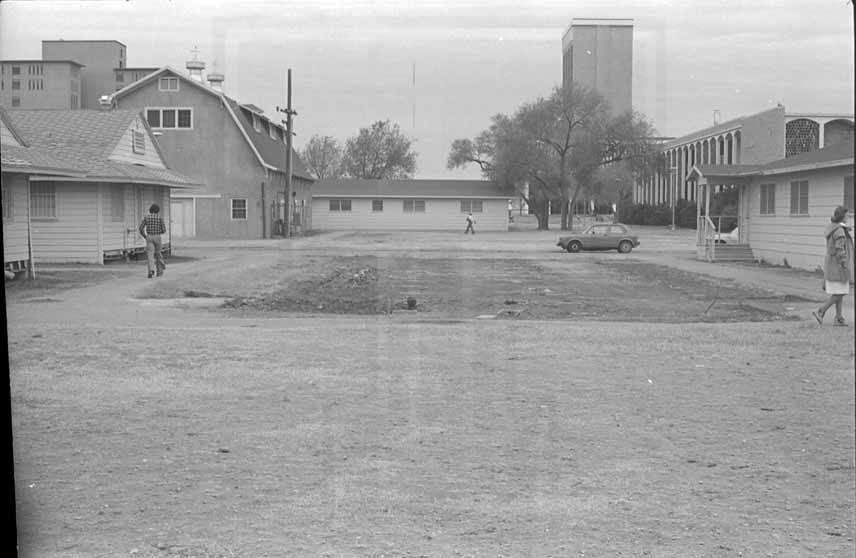 The image shows the temporary buildings surrounding the Dairy Barn in 1977. The Dairy Barn was originally built in 1927.

The image shows the original Dairy Barn in 1926. The barn has undergone multiple renovations. On Oct. 15, Tech unveiled its new renovations with a ribbon-cutting ceremony.

Attendees of the Dairy Barn ribbon-cutting ceremony crowd around the newly renovated Dairy Barn and mingle prior to the ceremony. The Dairy Barn Ribbon Cutting Ceremony took place on Friday, Oct. 15 at 8:30 a.m. at the Daily Barn located on campus at 2906 18th St.

The image shows the temporary buildings surrounding the Dairy Barn in 1977. The Dairy Barn was originally built in 1927.

Built-in 1926, the Dairy Barn is symbol of history for most people of the Texas Tech community. Through the years, the Dairy Barn has been a creamery, a classroom, a vacant space and an event place. Tech unveiled its most recent renovations to the Dairy Barn last week.

“The Dairy Barn means so much to my family,” Matt Wilson, Tech alumni of the class of 2001, said. “My grandfather worked in the Dairy Barn creamery for part of his tuition in the late 1930s.”

In the late 1930s, the Dairy Barn was operating, Monte Monroe Tech Southwest Collection/Special Collections Library archivist and Texas state historian, said. Many students were working there to pay parts of their tuition.

“My grandfather worked nearly all day while also being a college student,” Wilson said. “My grandma was a home economics major, and they would have to make time to see each other.”

Griffith would sometimes sneak out of her dorm room to make time to see Harbin after he was done working, Wilson said. Her dorm room at Tech had a curfew, but sometimes she would have to break curfew just to spend time talking with him since he was busy working at the Dairy Barn all day.

The two were amazing people who loved each other and Tech, Wilson said. The Dairy Barn played a large part in their life, and it is nice to have the barn still be a part of Tech.

“My whole entire family goes to Tech, and one of our favorite things to do when we go visit is to go see the Dairy Barn and tell the stories my grandparents had,” Wilson said. “I can’t wait to go see the renovated Dairy Barn when we come to visit.”

There were times when the Dairy Barn was vacant, and there were plans for it to be demolished, Monroe said. But it was repurposed throughout the years. It was even used as a classroom space for some years.

Retired music professor Richard “Dick” Tolley said he taught trumpet lessons in the Dairy Barn from about 1963 to 1966.

“At the time, the admissions for the school of music had risen, and they were having difficulty on where to hold lessons,” Tolley said. “The barn was nothing like it looks like today.”

The floors were uneven, and they had to pour concrete to even out the surface, Tolley said. The weather was sometimes a problem, especially in the winter, but overall it was an adequate space.

Tolley had about 30 hours of lessons per week., he said. As admissions went up, the busier the music program got and the more space they needed.

“I remember my students would refer to the barn as the Tolley barn,” Tolley said. “The barn looks different now, but I am happy it is still there for everyone to enjoy.”

Tolley was a professor at the school of music from 1951 to 1991, he said. He is happy to see how much the school has grown, including the music program and the Dairy Barn.

“The Dairy Barn was one of the first four buildings on the Tech campus,” Monroe said. “The barn had many purposes and holds a lot of history.”

When Monroe thinks of a person associated with the Dairy Barn, the first person who comes to mind is Arch Lamb, he said. His efforts and memory have saved the Dairy Barn many times.

Lamb was one of the main advocates for the Dairy Barn. He’s also the founder of the Saddle Tramps, Monroe said. When there were threats many would think of him and his reasons to save the Dairy Barn.

“There are so many times when the barn was falling apart, and there were threats to tear it down,” Lynn B. Whitfield, a Southwest Collection archivist, said. “The alumni would then rise and refuse the tearing down of the building, so it is a big deal that it’s renovated.”

The Dairy Barn was marked as a Texas Historical Landmark marker in 2016, Monroe said.

“Our alumni are very passionate about that building,” Whitfield said. “For them, that is a symbol of the university.”