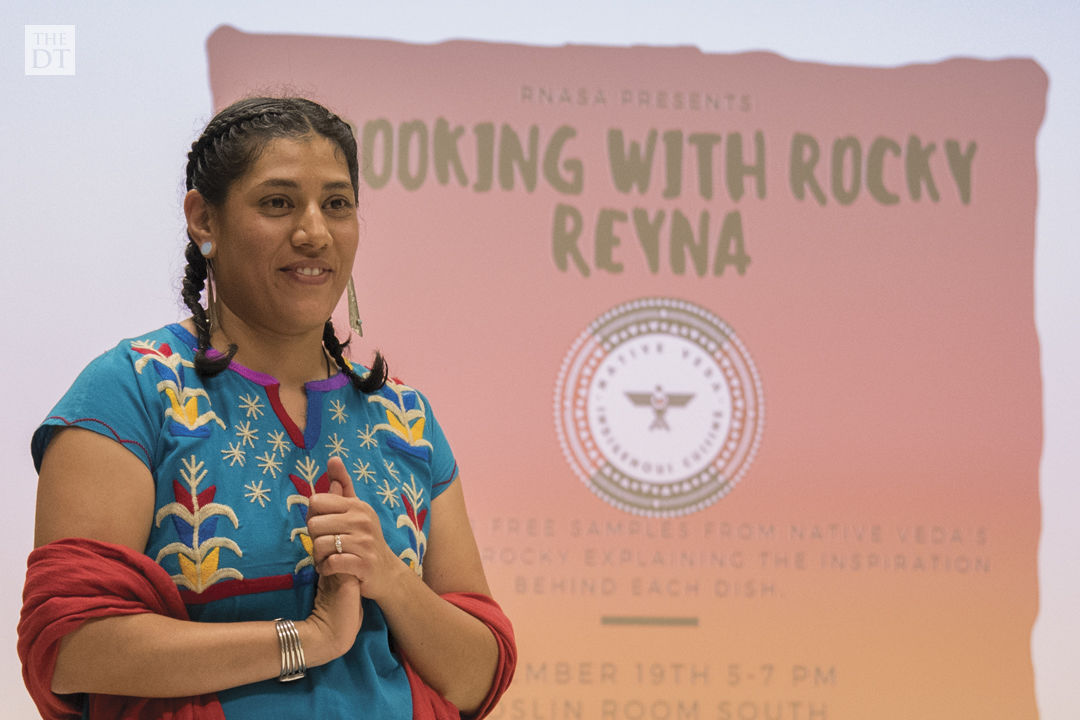 Local chef Rocky Reyna gave a presentation on her restaurant's food during "Cooking with Rocky" in the Texas Tech Library at 5 p.m. on Nov. 19, 2019. Raiderland Native American Student Association and the Division of Diversity, Equity and Inclusion became partners to host five events in honor of Indigenous Peoples Heritage Month. 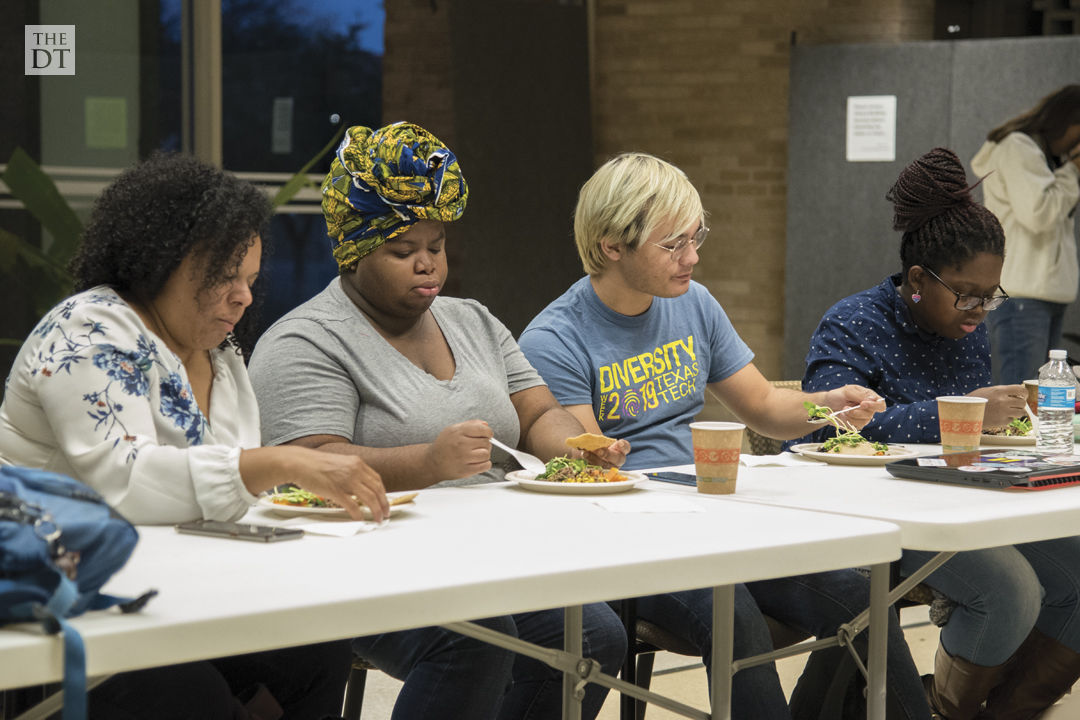 People in attendance enjoy eating the food during "Cooking with Rocky" in the Texas Tech Library at 5 p.m. on Nov. 19, 2019. Raiderland Native American Student Association and the Division of Diversity, Equity and Inclusion became partners to host five events in honor of Indigenous Peoples Heritage Month.

Local chef Rocky Reyna gave a presentation on her restaurant's food during "Cooking with Rocky" in the Texas Tech Library at 5 p.m. on Nov. 19, 2019. Raiderland Native American Student Association and the Division of Diversity, Equity and Inclusion became partners to host five events in honor of Indigenous Peoples Heritage Month.

People in attendance enjoy eating the food during "Cooking with Rocky" in the Texas Tech Library at 5 p.m. on Nov. 19, 2019. Raiderland Native American Student Association and the Division of Diversity, Equity and Inclusion became partners to host five events in honor of Indigenous Peoples Heritage Month.

One such event, Cooking with Rocky, was hosted in the Croslin Room South of the library from 5 p.m. to 7 p.m. on Nov. 19 and involved samples of indigenous foods from Rocky Reyna’s Lubbock restaurant, Native Veda.

Reyna began the event by leading a prayer with musical instruments and said it is important to ask for guidance and blessings before embarking on a matter of great importance.

Reyna is a chef at her local restaurant, she said. But Native Veda is about more than food.

Native Veda has just earned its 501-C3 accreditation and has long-term goals with a focus on better living, Reyna said.

“We specialize in stress management, which is yoga, sound therapy, sound healing, arts and Ayurveda,” she said. “We also are focusing on sustainable living systems such as permaculture, eco-housing via an Earthship production and eco-bricks, organic food production, reusing resources, such as in trash or reusable items, and also, zero waste concepts. We also focus on nutrition education.”

Growing up, Reyna said she suffered from severe autoimmune health issues as a result of her environment. After spending time in a coma and being told she would probably die, she said she took classes at Tech and decided to look at food a different way.

“At that point, [I was] 27. I was dying, and I was sick, and I made a choice to develop a relationship with food, ancient knowledge, myself and with others, and I encourage you to do the same because the world depends on it,” she said.

Indigenous foods differ depending on location, Reyna said. But for Lubbock, indigenous foods include those grown in North and South America as well as Texas and even as far as areas near Minnesota.

“Indigenous foodways incorporate both earth honoring food production, cultivation practices and foodways that are healthy for individuals,” she said. “This is how we prevent disease and increase well-being of humans and the planet.”

Hannah Baird, a member of Native Veda, is working to get Native Veda the funding and grants necessary to start building Earthships.

“Once we’re able to get a building, so we can teach people how to cook nutritiously with whole foods, I’ll be probably teaching a couple classes as well,” she said.

One goal for Native Veda, Baird said, is to teach other people how to be self-sufficient while still caring for the earth and the resources taken from the land.

“Let’s say we get the building, the building for the teaching and the yoga and the food, and we could use permacultural principles to develop the land around, so it’d become like a food forest around the building,” Baird said. “So, it’s not going to get off the ground until we’ve got a space to do it. Then, we can bring in permacultural teachers and simultaneously apply those principles and cultivate that land at the same time, teaching people who want to be part of it.”

“For us, for the Mescalero Apache, which is predominantly the type of food that [Reyna's] making today, the food is the medicine — it’s part of our culture, it’s part of our identity and what we do, basically,” the sophomore biochemistry major from Houston said.

Kabl Wilkerson, an anthropology graduate student from Lubbock and president of Raiderland Native American Student Association, said the organization has a lot in common with Tech.

“We’re on indigenous land, so that’s a very clear relationship,” he said. “We try to do a land acknowledgement for every event or gathering that we have in order to honor and recognize we’re on Comanche land, or what is historically Comanche land.”

The Raiderland Native American Student Association is open to all students and upholds an untainted view of history, Wilkerson said.

“The narrative of indigenous peoples, quite frankly, is erased, deliberately,” he said. “There have been many attempts to sort of revise history in an understandably national narrative to justify taking of land, to justify the hardships and the plight incurred by native peoples but we certainly assist in trying to elevate the voices of Native students and create space for Native students where there has historically not been on this campus.”