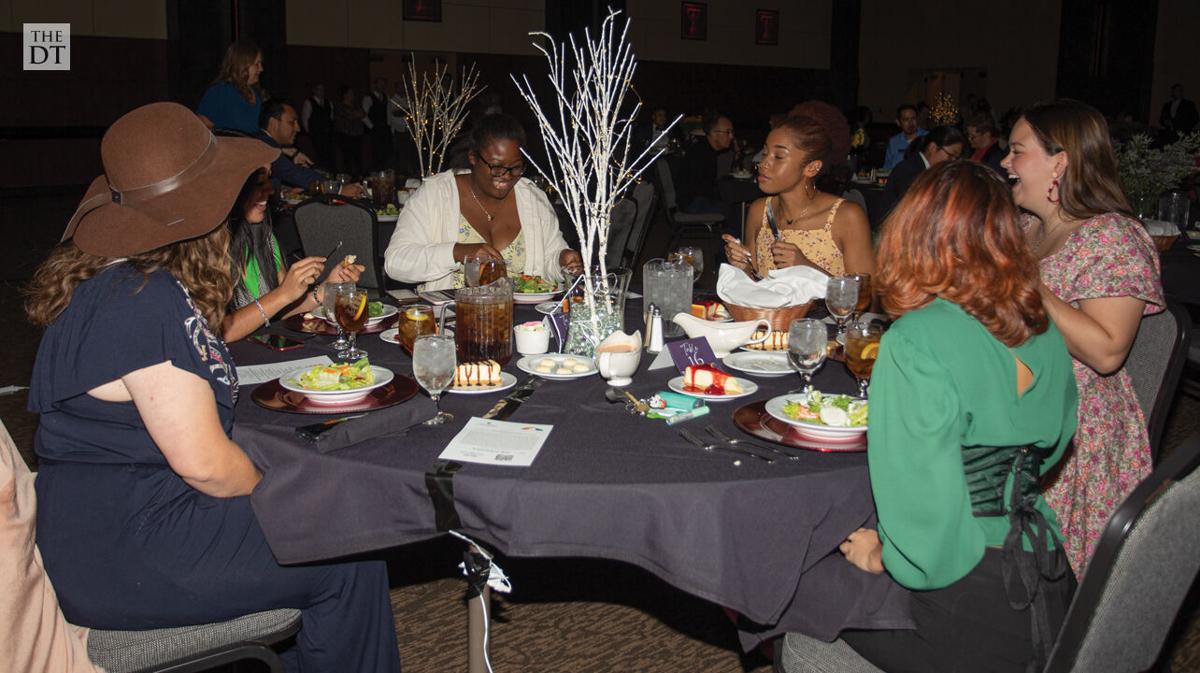 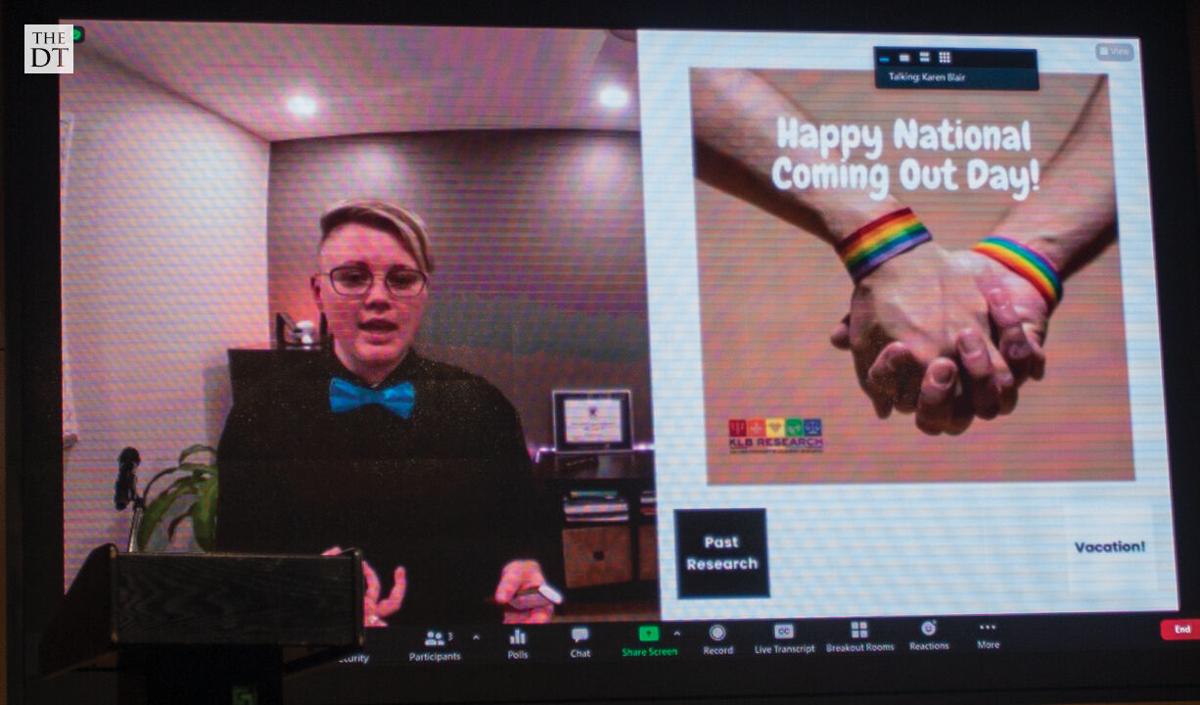 Karen Blair zooms in to talk about her studies on same-sex public affection sharing followed by a Q&A The Boots, Bows & Rainbow Ties Gala hosted by the Texas Tech University Office of LGBTQIA Education & Engagement on October 11, 2021 in the Student Union Building Ballroom. 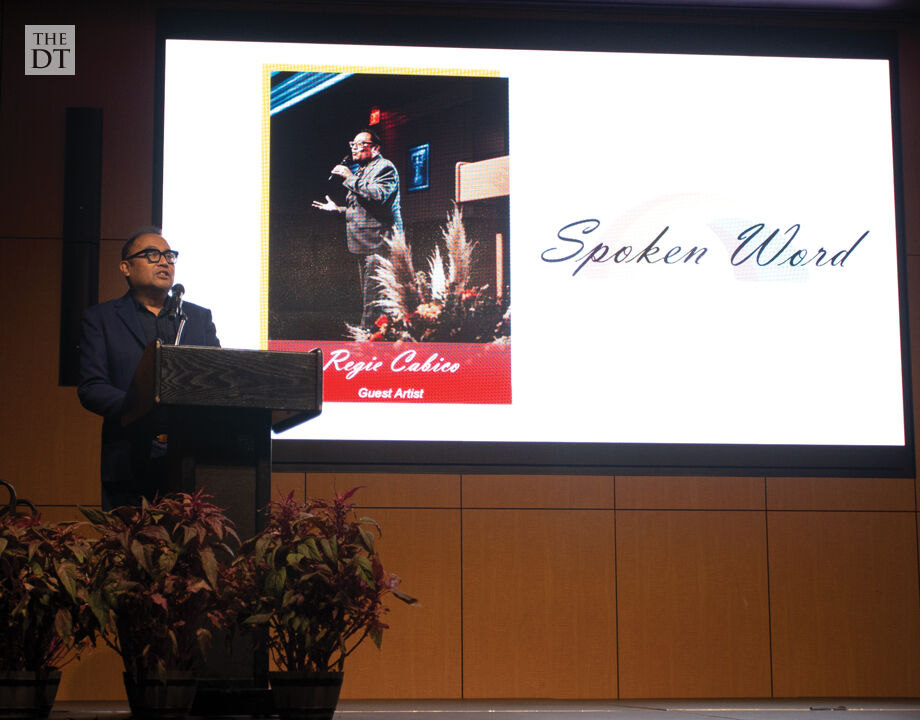 Karen Blair zooms in to talk about her studies on same-sex public affection sharing followed by a Q&A The Boots, Bows & Rainbow Ties Gala hosted by the Texas Tech University Office of LGBTQIA Education & Engagement on October 11, 2021 in the Student Union Building Ballroom.

Texas Tech’s Office of LGBTQIA Education and Engagement hosted its Boots, Bows and Rainbow Ties Gala at 6:30 p.m. on Oct. 11 in the Student Union Building Ballroom.

The annual event is part of Tech’s Pride week schedule of educational and social opportunities for the Tech community. Aerik Pachicano, a fourth-year communications student from Lubbock, said he has attended the gala every year since he has been at Tech.

“I love the people, I love connecting with the people that I know, and it’s always informational, somebody who comes has always got something interesting to say that you can take with you and use, utilize,” Pachicano said.

Ken Lenoir, a second-year civil engineering student from Houston, said this was his first time attending the gala. He said he was most excited for the speeches and motivational messages throughout the event.

Lenoir also said he will compete in the upcoming Miss Glamour and Fame Drag Pageant coming up Friday, Oct. 15. Events supporting the LGBTQ community at Tech, he said, are necessary for connection and representation within Tech.

“As part of the LGBTQ community and a student here at Tech, I feel safe going to galas, like, stuff like that, and participating in Pride Week,” Lenoir said. “I feel like I’m learning, like, basically who I am is being shown.”

The gala began with opening remarks from graduate assistant for peer education Matt R. Hernandez, a spoken word performance by poet Regie Cabico and welcoming remarks by vice president of the Division of Diversity, Equity and Inclusion Carol A. Sumner. Two more speakers introduced the Pride exhibit at the Tech library and the Texas Pride Impact Funds, respectively.

This year’s speaker was Karen Blair from Trent University, president of LGBTQ Psychology Canada and chair of the Sexual Orientation and Gender Identity Issues section of the Canadian Psychological Association. Blair, who joined on Zoom from her home in Canada, shared her research on public affection in same-sex versus mixed-sex relationships.

Blair said the inspiration for her research into public affection came from being on a vacation retreat specifically for lesbian women. She said she noticed how couples returned from their walks on the beach distancing themselves from their partners, which she soon learned was because of the negative attention they received as same-sex couples in public.

Blair’s research included studies on heterosexual men’s reactions to public displays of affection between gay men and an examination of the “gay panic defense” that protects those who enact violence against LGBTQ people. Blair said her research showed that there was no scientific data that supported this legal defense.

For more information and a complete list of Pride week events at Tech, visit the Office of LGBTQIA’s website.