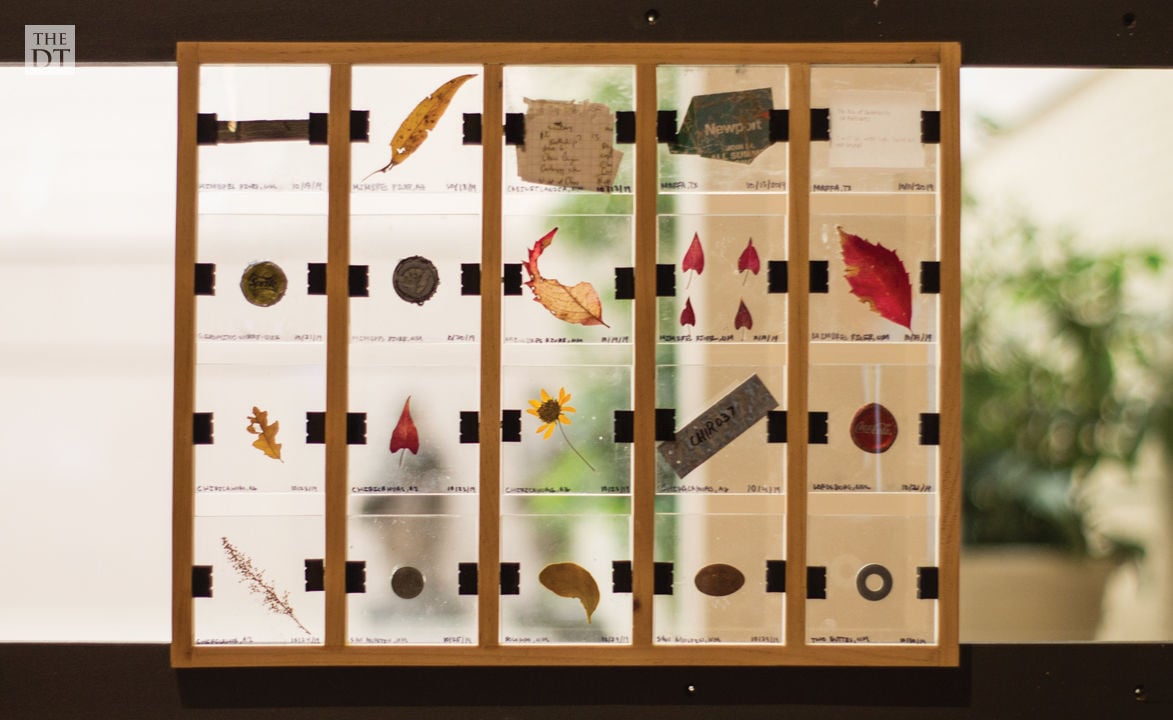 Different types of land are symmetrically laid out for the Land Arts exhibit at the Museum of Texas Tech University on March 6, 2020. The Land Arts program takes students on a two month road trip to create inspiration for an art piece. 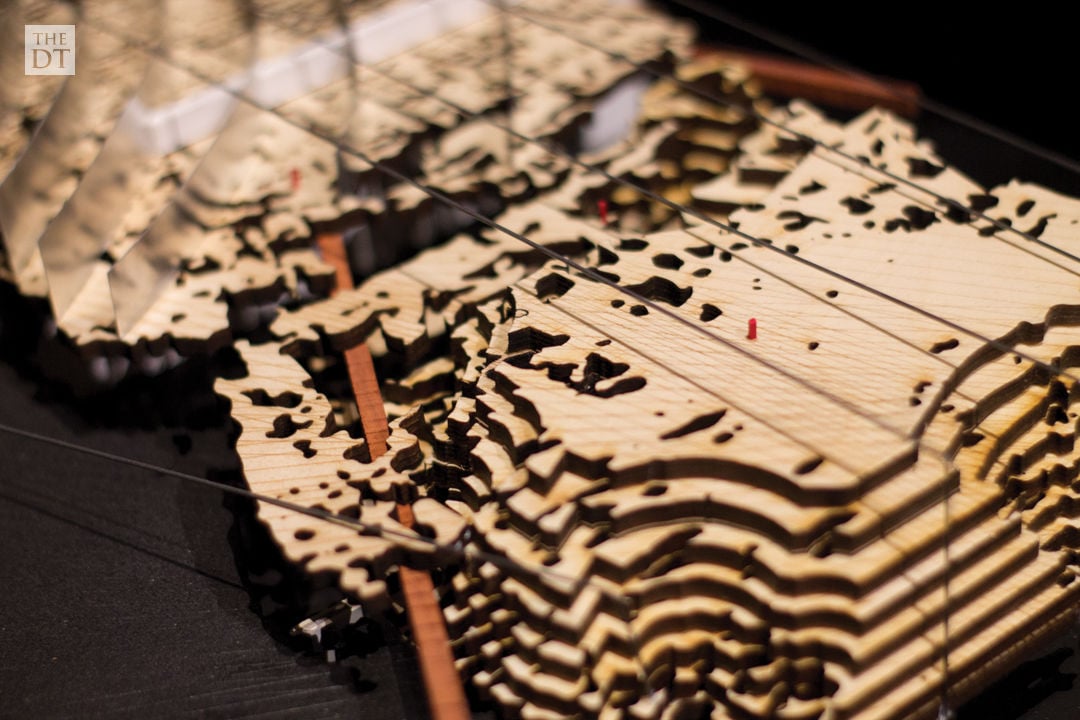 An art piece in the Land Arts exhibit at the Museum of Texas Tech University on March 6, 2020. The Land Arts program takes students on a two month road trip to create inspiration for an art piece. 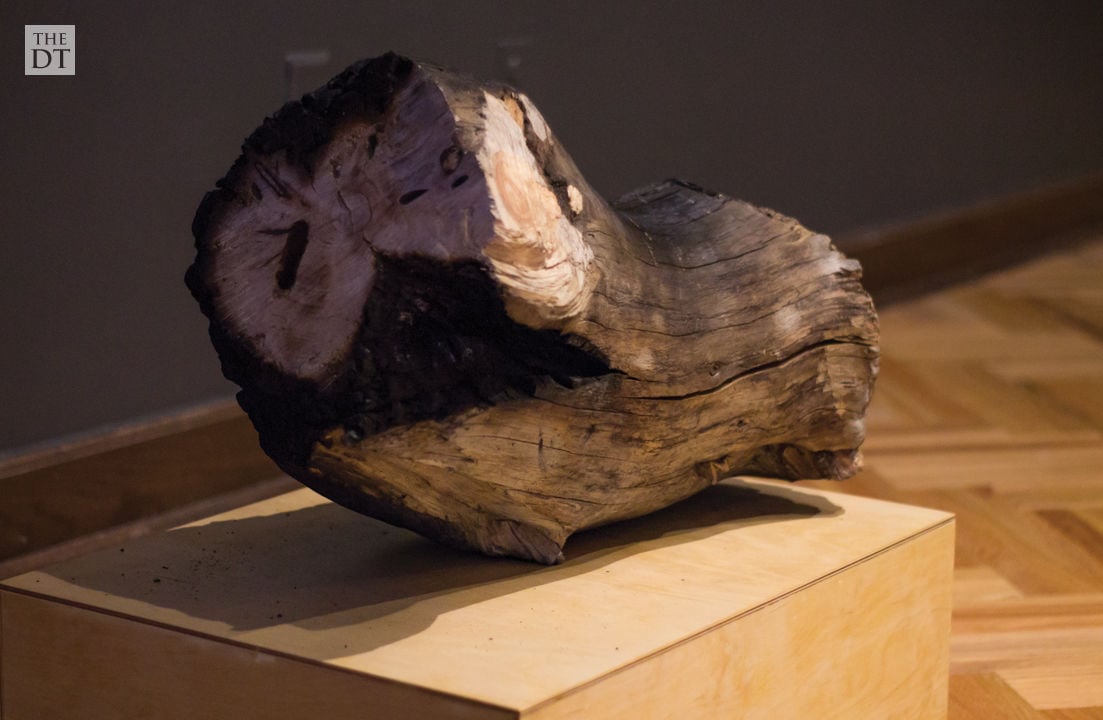 A log piece of art displayed at the Land Arts exhibit at the Museum of Texas Tech University on March 6, 2020. The Land Arts program takes students on a two month road trip to create inspiration for an art piece.

Different types of land are symmetrically laid out for the Land Arts exhibit at the Museum of Texas Tech University on March 6, 2020. The Land Arts program takes students on a two month road trip to create inspiration for an art piece.

An art piece in the Land Arts exhibit at the Museum of Texas Tech University on March 6, 2020. The Land Arts program takes students on a two month road trip to create inspiration for an art piece.

A log piece of art displayed at the Land Arts exhibit at the Museum of Texas Tech University on March 6, 2020. The Land Arts program takes students on a two month road trip to create inspiration for an art piece.

As Skylar Perez was beginning his semester at Texas Tech last fall, rather than being handed a scantron or textbook from his professor, he received a lighter.

“(My professor) was like this is for warmth and also we’re supposed to, while we were out there we had to… light our toilet paper on fire after,” Perez, a graduate student studying Architecture at the Rhode Island School of Design, said. “Yeah, we were living very, very environmentally cautiously.”

This caution “out there” was to help preserve what would become both Perez’s classroom and home for the coming two months: the landscapes of the American West.

Perez, along with nine classmates, associate professor of architecture Chris Taylor and program assistant Kellie Flint, spent over 50 nights and 6000 miles living out of a van and two trucks as part of the 2019 class of Land Arts of the American West, a semester long field program housed within the Tech College of Architecture.

“I’ve said in the past, it’s like a semester abroad in your backyard,” Taylor said, regarding the program.

Taylor, who serves as director of Land Arts of the American West, brought the program to Tech in 2009 from the University of Texas at Austin. The program offers students an experience no other institution can match in terms of saturated duration in the landscape, he said.

Participants whose backgrounds range from art to architecture spend approximately two months in the field before returning to Tech for a final month in the studio to produce works inspired by their travels, he said. Works from the 2019 Lands Arts program, which include paintings, writings, photographs, videos, and more, are currently on display at the Museum of Texas Tech University and will be exhibited until April 19.

“People come from all over the planet and have their own research question they’re pursuing,” Taylor said. “And ultimately, the other kind of big idea of the Land Arts Program is we’re looking at the American West as a laboratory landscape and asking questions about human’s relationship to landscape through the sites that we visit and the work that people produce.”

While traveling through the American West, program participants visit iconic pieces of art history such as “Spiral Jetty” and “Sun Tunnels” in Utah, “Double Negative” in Nevada, “The Lightning Field” in New Mexico and more, Taylor said.

These works of art merge land and human creativity together, Taylor said. But, as an architect himself, he defines art on even broader terms as cultural expression.

“And so then we start to look at what have humans done on the land in a broader way, and so it’s not just the things someone’s pointing to to say, ‘Look, that’s art,’” he said. “So then the open pit copper mine become a cultural expression, so we visit mining sites.”

One of the first places the group visited in the fall was a partially reclaimed former open pit uranium mine which is still a radioactive site, he said. The group also visited sites like the Grand Canyon, and other places that had been intentionally preserved.

“We’re constantly dialing back from aspirational things that are inspiring, to things that kind of leave us with a sick feeling in our stomach, hopefully not permanently,” he said. “And then thinking about, ‘What’s my response to all that relative to my work? What do I do with that now with my voice? What I want to add to the world?’”

The group stays at sites anywhere from one night to five or six nights, Kellie Flint, program assistant, said. Flint is currently an adjunct professor at College of the Desert in California and previously participated in the program as a student in 2017. Some sites are work sites where students are working on their projects, doing readings and developing ideas, and others are more urban where there are more activities and galleries to see.

In between sites, the group has travel days during which they can be driving for the bulk of the day, she said. In addition, the group also hears from various field guests who are artists, poets, writers and more who visit and discuss their work.

The amount of time students spend together during these experiences makes the dynamic between them a significant part of the journey, Flint said.

“There’s this other side of thing that has to do with the people you get to know and I, in particular, feel like I had a really fruitful experience in helping and speaking to participants about their projects and their interests,” Flint said.

The time spent together can even go on to influence the works produced, Perez said.

The works are based on research questions students pose prior to their travels and explore in the field, Taylor said. There is an openness in the framework of what students can chose to do; no one is saying what is in-bounds or out-of-bounds.

In Perez’s case, he chose to look at the world landscape itself and what it can possibly be, he said.

“I looked at landscapes across realities and landscapes of the mind, and so conceptual landscapes was the main focus of what I was looking at,” he said.

His finished work included three different 10-foot long panels, all of which were presentations of landscapes, he said. The middle panel was a physical model to look at geologic time and consisted of a petri dish with bacteria and fungi from the sites. The bottom panel was a landscape of imagination composed of aerial shots of the sites ordered by experience rather than geography, and the top panel was a landscape of the mind expressing times, ideas and experiences.

In addition to the works produced for the exhibit, Taylor said ideally, there is a more long-term impact from the program.

“Ultimately to me, the other question is the work that they’re going to make in 10 years is as or more important,” he said. “And the way that they’ll continue to process the experience and reflect on this work, but also work that they have yet to make.”

Hopefully, the students’ experiences allow them to fully appreciate the American landscape, which is taken for granted too often, Taylor said. Particularly in the desert, people tend to singularize the landscape as a wasteland and assume there is nothing out there, hence the reason atomic bombs were once dropped in the desert.

Through their experiences in this landscape, students in the program have the opportunity to see that there is more, he said.

“If you really spend time with a place, just like if you go spend time with a person, you start to realize, there isn’t just this one layer to the situation, and there isn’t kind of one response,” Taylor said. “The singularizing thing is a problem, and it’s something that we got around by just saturating ourselves in deeper and deeper ways.”

Applications for the 2020 Land Arts of the American West Program are due on March 11. Interested undergraduate and graduate students from any institution can apply. More information and contact information for Taylor are available at landarts.org.