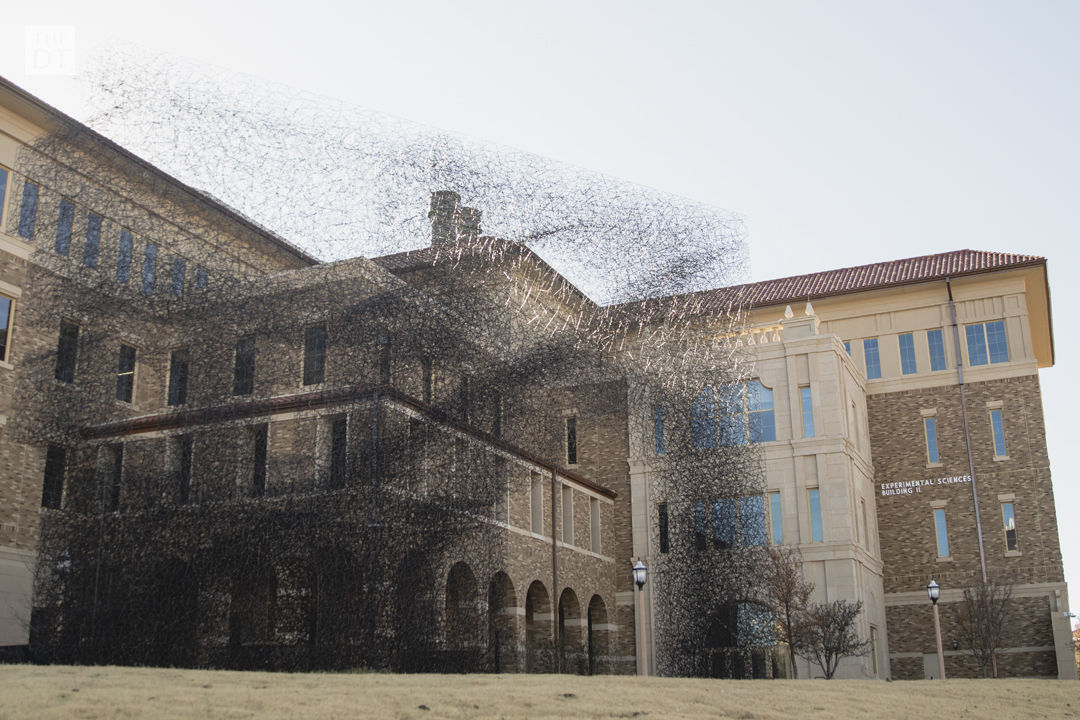 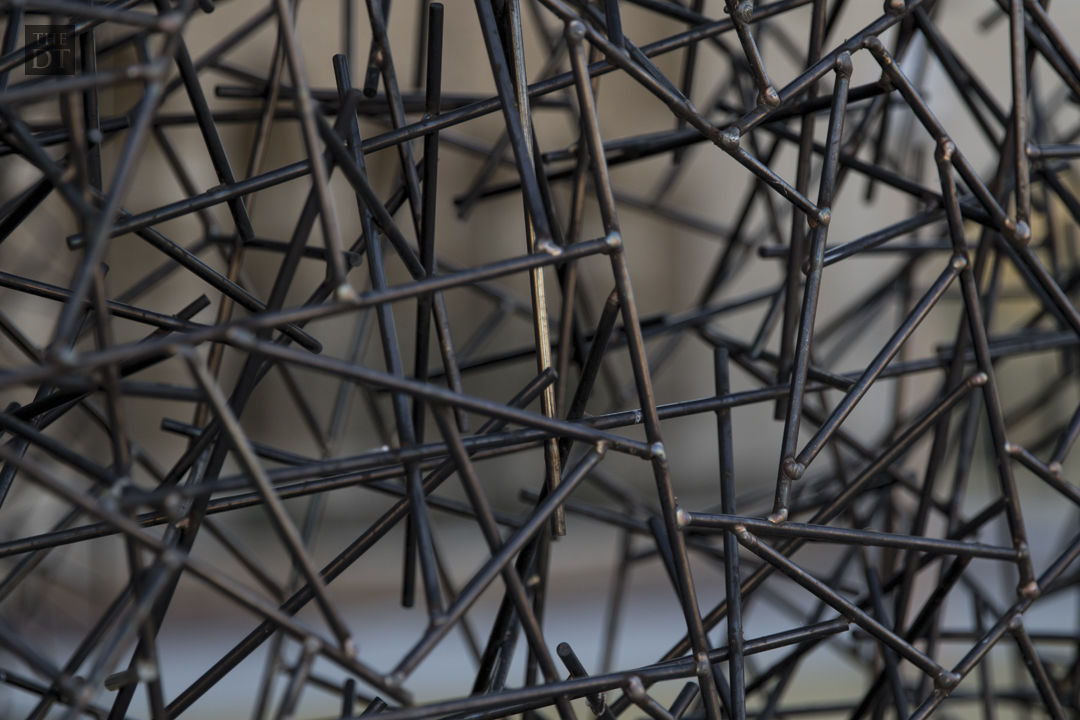 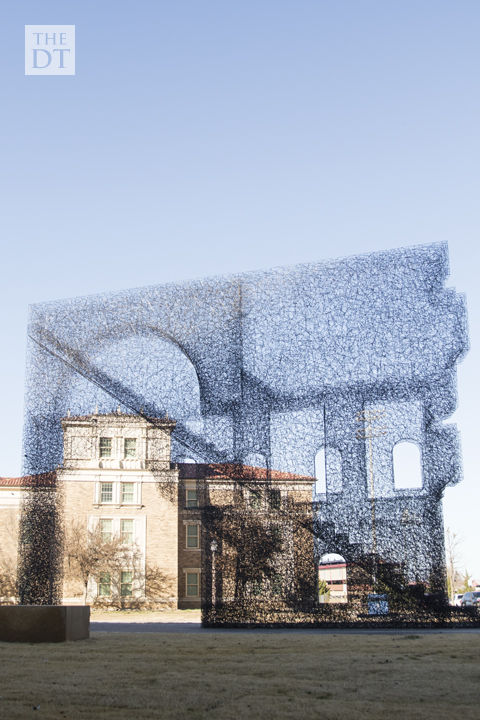 When artists Daniel Mihalyo and Annie Han first visited the Texas Tech campus, they were struck by the cohesive Spanish Renaissance-style campus architecture.

“You know, most college campuses don’t have a clear overall design,” Mihalyo said. “Almost all college campuses have just a mix of buildings, modern, new and old, but this one, this one is just so specific, and it was such an invitation for us.”

Following many months at work with over 250,000 pieces of steel and roughly one million welds, Mihalyo and Han responded to this initial invitation with “Oblique Intersections,” a nearly 30-foot tall, translucent, stainless steel public art piece installed in conjunction with the recently opened Experimental Sciences Building II.

“(The public art installation) is almost like a line drawing of (ESB II) itself,” Emily Wilkinson, Tech System Public Art director, said. “Some of the archways and windows in the piece are the same size that are on the actual building. There’s a staircase that actually runs up through the middle. It’s kind of like a 3D scan of the interior of the building, so it’s almost like a shadow of the building, a way to kind of give people a new way to look at things.”

The art piece was installed over the summer as part of Tech’s Public Art Program, which allots one percent of the construction budget of new buildings to public art, Wilkinson said. As the ESB II is one of the bigger, more intricate buildings on campus, the budget for this project was relatively large.

With the large budget, this project was particularly competitive, with over 160 artists submitting proposals, Wilkinson said. The four finalists for the project were some of the biggest artists she had seen apply. The committee who went over the proposals were ultimately drawn to the proposal from Lead Pencil Studio, founded by Han and Mihalyo, because of its site-specific nature.

“They really had a vision to tie it into the Spanish Renaissance architecture of the campus, and I think the committee really liked that, that it would be very Texas Tech specific,” Wilkinson said. “It matches that building and our campus really well but in a different kind of way, and it just felt like they were really trying to create something unique to us.”

Despite working as artists, Mihalyo and Han are actually both trained as architects, Mihalyo said, and it is an influence in their work. The work is primarily interested in the subject of architecture and space, and its relationship to a site and its cultural history.

In addition to creating a piece consistent with the scale of the surrounding architecture and their own interests and work, Han said they also considered the fact that students would be constantly walking around the piece.

With students constantly passing by, they did not want to construct a piece that could be wholly seen in one shot, from one point of view, Han said. So, they introduced a skewed 20 degree, oblique angle rather than constructing a traditionally orthogonal structure.

“What that did was as you walked around the piece when your point of view, or your visual line is aligned with the plane perfectly on the angle, then the opening becomes really clear,” Han said. “As soon as you move away from the piece, it becomes kind of blurry and kind of almost like a cloud form until you go to the next position that you are aligned with the angle perfectly. So it gives a little more depth and complexity and a little more play with the individuals as they’re looking at the piece.”

The use of this oblique angle, among other design features, allows viewers of the piece to see different forms within the piece from different angles, a big component of the project, Mihalyo said.

They wanted to provide as many opportunities as possible for different views of the piece, he said. Depending on where one is, the time of the day, one’s position relative to the sun or the weather conditions, the work can change.

“We didn’t want people to feel like they saw it and knew it on their first view. In a lot of ways, artwork can kind of become invisible in that way because you feel like you understand it,” he said. “And in this way, we were hoping to sort of maintain interest over a long time by providing that translucency with these architectural objects.”

The usage of the oblique angle in the piece along with the word “Oblique” in the title also serve as reference to the nature of the Spanish Renaissance architecture history being translated into the United States.

The piece itself is Spanish Renaissance Architecture in its oblique form, he said, sort of skewed or like in a parallelogram.

“Every time we look at that history and carry it forward from Europe and reinterpret that, a change or a transformation occurs in the style,” Mihalyo said. “Something gets simplified or something gets elaborated, and we wanted that to be referenced.”

While Mihalyo said he does not necessarily have an answer as to what he hopes students take away from the piece, he hopes they engage with it.

“I think we just hope that they enjoy it, and that they think about the forms and look for those forms repeated in the adjacent architecture,” he said, “not only in the new building but the other buildings you know within a few block radius of that site.”