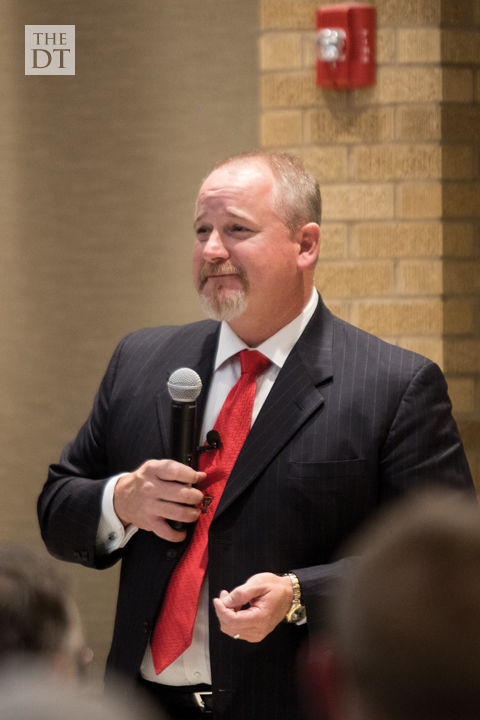 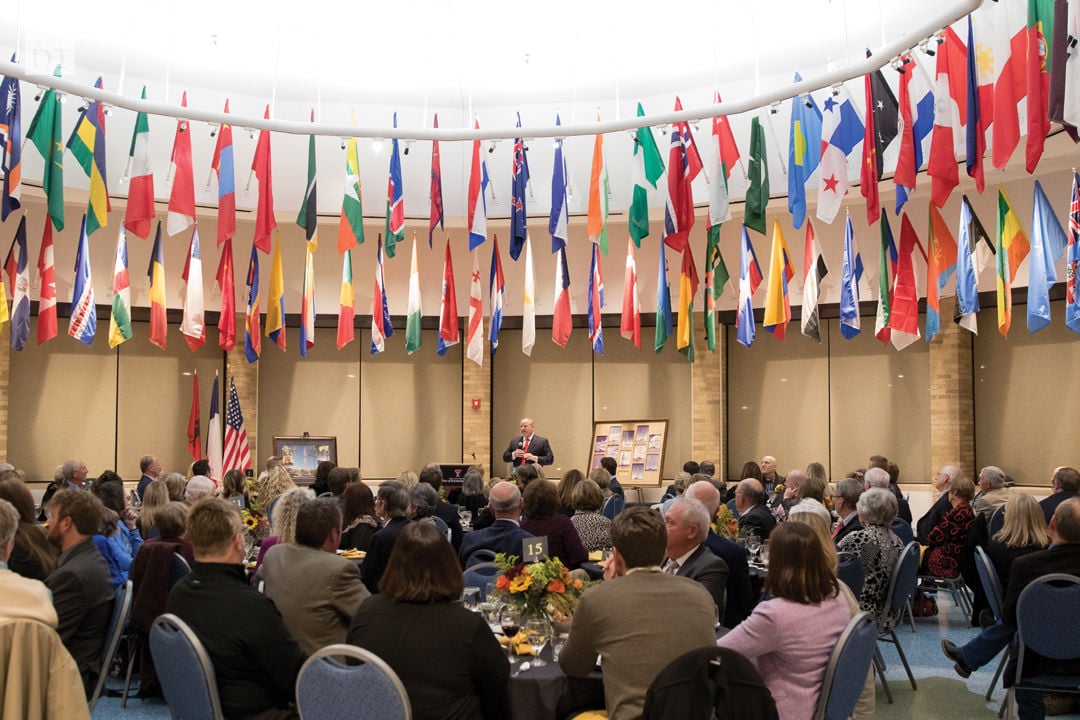 T.M. “Roe” Patterson spoke about his book, “Crude Blessings: the Amazing Life Story of Glenn Patterson, American Oilman,” during an event hosted by the Texas Tech Friends of the Libraries at 6:30 p.m. on Nov. 14.

Friends and family of Patterson met in the International Cultural Center in the Hall of Nations to eat, converse and learn more about the book, which is about his late father, Glenn Patterson. Roe Patterson personally autographed copies of his book for each guest in attendance.

Martha York, friends of the libraries member, began the event by acknowledging the organization’s work. She said Tech Friends of the Libraries works to support the 6,000 students who enter the university library each day.

“Our efforts through the friends of the libraries have supported the funding for laptops that students can check out, free of charge, to use in the library,” York said.

Walton said “Crude Blessings” depicts Glenn Patterson in an accurate light and provides a standard Americans can learn from.

“Crude Blessings,” Roe’s book, describes Glenn’s core values and dedication to his family, brand and employees,” Walton said. “It defines how Glenn’s character is a valuable example for the American spirit or perseverance and fair play.”

Glenn was not the only known leader, however, as Walton said Roe Patterson exhibits qualities leaders should possess.

“Wisdom and skill are necessary,” Walton said, “but without the ability to relate to others in a caring way, a leader’s impact will be insignificant; leaders care about and are concerned with others.”

Roe Patterson earned his bachelor’s degree in biology from Tech and was employed by West Texas Caterpillar before rejoining Patterson Drilling, the family company, as a contract sales manager for the Permian Basin, Walton said. Roe Patterson has since moved up the ladder and is the president, chief executive officer and a director of Basic Energy Services Inc., a Fort Worth-based company.

Writing “Crude Blessings” helped Roe Patterson cope with his grief, he said. He chose to write the stories that most accurately depict Glenn Patterson’s life after discovering gaps in the stories that he told his children.

“And it was hard,” Roe Patterson said. “And it was easy at times. It was therapeutic. It was fun. It was sad. Cried a lot. But, I’ll tell you what ­— unbelievably fulfilling.”

Glenn Patterson was a man of many morals, Roe Patterson said. His father emphasized being the best one can be while treating people well.

Glenn Patterson dad was diagnosed with Alzheimer’s and handled the illness in which Roe Patterson said was his typical fashion. He said Glenn Patterson was determined to beat the disease, then he was in denial and eventually died but not before undergoing a religious awakening that solidified his core values.

“His whole life, he lived by Christian principles,” Roe Patterson said. “He did for others as much or more than they could do for themselves. He tried to give every chance he got. He tried to see the better in people. He gave away more money than we could ever count, and he was generous to a fault both with his time and his money.”

Growing up, Roe Patterson said he learned many lessons from his dad and keeps them in mind.

“One of the things I learned as a CEO, growing up watching dad was, always try to find people that are smarter than you," Roe Patterson said, "and I’ve been fortunate in my career to surround myself with very smart people."