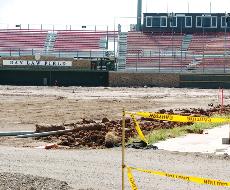 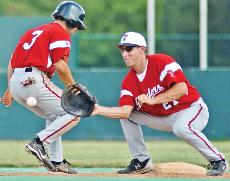 Because the installation of the FieldTurf surface at Dan Law Field will not be completed until at least November, the Texas Tech baseball team began fall practice Wednesday at Hays Field on the Lubbock Christian University campus.

The new turf replaces the Astroturf surface in the infield and the natural grass in the outfield. The only dirt on the field will be the pitcher's mound, while the areas around the bases will be a terracotta-colored FieldTurf to resemble dirt.

Tech coach Larry Hays, the namesake of LCU's baseball field, said he enjoys putting the uniform on and competing, even if it is only an intrasquad scrimmage.

"It's just great to be out at a ball yard playing baseball," he said. "We've been working hard since the beginning of school and to get to come out now and to get to play ourselves, right now it's a lot of fun."

Junior outfielder Roger Kieschnick, who played for Team USA for the second consecutive summer, said it doesn't matter where the team practices, he just enjoys getting back out onto the field.

The baseball team welcomes two new assistant coaches, including Dan Spencer, who comes to Tech from Oregon State, where he served as pitching coach for the Beavers during their back-to-back national title seasons in 2006 and 2007.

The other new coach, Trent Petrie, comes to Tech from Oklahoma State, where his team claimed the Big 12 Tournament championship in 2004, via New Mexico.

"Both these guys (have) a lot of energy, both been head coaches; they've had a lot of success as a head coach and assistant coach," Hays said. "Put the two together and (volunteer assistant) Lance (Brown) working with the outfielders with his experience, it's a good staff."

Tech, who finished the 2007 season with a 27-28 record and went 8-18 in Big 12 Conference play, returns junior pitchers Miles Morgan and A.J. Ramos to the starting rotation and could add freshman Chad Bettis, who opted to play for Tech instead of the Houston Astros after they selected him in the eighth round of the 2007 MLB Draft, to the rotation by the start of play in the spring. Other new pitchers include freshmen Brennen Stewart and Robert Kilcrease.

Junior James Leverton has been moved from first base to full-time pitcher for the upcoming season, in part because of the NCAA rule that shortens the season, but allows for more games.

"I want to see them throw strikes and be very aggressive," Spencer said. "Those are the two things I told them. You're going to compete and throw strikes, and we'll worry about the rest of that in the winter."

On the offensive side of the ball, Hays said he expects junior college transfer Tanner Rindels to replace Leverton at first, and redshirt freshman Monk Kreder to replace catcher Matt Smith, who was drafted in the 14th round of the MLB Draft by the Oakland Athletics.

One player Hays said will be an impact player this season is junior outfielder Chris Richburg, who was named Player of the Year this summer in the Texas Collegiate League, a wooden bat league in the Dallas-Fort Worth area.

"With Kieschnick and Richburg and Kreder in the middle of the lineup ... (Doug) Thennis - that could stretch our lineup out," Hays said. "(Richburg is) a key part of it. He's now a good outfielder."